It’s now been almost two weeks since I returned from France, and I’ve been too busy launching back into my novel in progress, THE LAWS OF MOTION, and recovering from lingering jet lag to be able until now to add a new entry to this site.

I wrote during the trip about points in between but not about the delightful beginning and end to my stay in Paris and eastern France, so I’ll focus only on those two things here. I began my stay in Paris with dinner on the Left Bank with Jacques Guiod, the French translator of THE FOUR SEASONS. Here we are, taking a look at the newly released LES 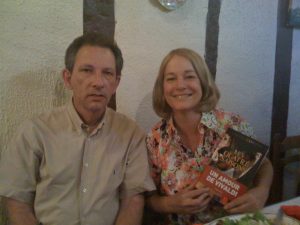 QUATRE SAISONS. By the end of the trip, I’d checked in six bookstores, large and small, in cities and in small towns, and found copies of it everywhere. Thanks, Jacques! If it’s a hit in France, take a big bow!

On the last day of the trip, I visted Ferney, the town near the Swiss border where Voltaire lived until shortly before his death. I’d gone to France with much of THE LAWS OF MOTION drafted, but the scenes set at Ferney are from the climactic pages of the book, 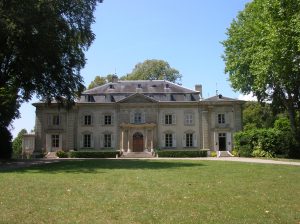 which are still ahead of me. It might sound odd to some people, but I’ve found it immensely helpful to do my on-site research after I’ve written a draft of a book. Basic information about settings is usually pretty easy to get at home. It’s the little facts and the small details that aren’t mentioned that I need to go find out for myself–what kinds of trees are in a garden, the floor plan of a house, the view from a particular window. Traveling afterwards, I can go with a better idea of exactly what I need to know, and I don’t end up regretting what I didn’t notice or didn’t think to do while was there. Of course if this writing thing ever starts paying the bills, I’d move to a place and write the book there, but I imagine that’s every writer’s dream!

It was, therefore, different and rather exhilarating to be at Ferney and imagine what might happen in the last chapter of my book rather than just fine-tuning the details. I’ll see how this new approach to research goes when I get to that point in the book, but right now, I’m going to sign off and get back to work. I’m rooting for my heroine, Lili, and I can’t wait to see what she’s going to do next! 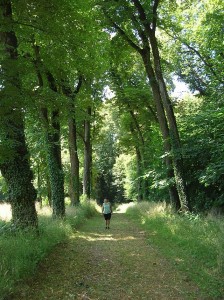