I admit it–I’m a big fan of Professional Bull Riding. The bulls are doing what they are born to do, and they trot out of the arena so quickly they must be expecting a sweet reward after they’ve left some cowboy clinging to the fence. (That’s the aptly named Ryan Dirteater in the photo to the right–a young Cherokee rider who’s the latest sensation.) It seems to me to be the fairest contest between “man and beast” in sport–and no, it isn’t true that the bulls’ 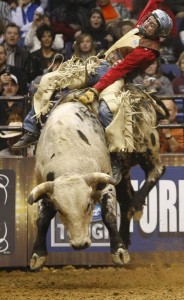 testicles are cinched to get them to buck–that part of their anatomy is far too valuable to mess with! I also have to admit that I don’t like women’s gymnastics very much, despite the incredible things gymnasts can do, largely because so many of the contestants look like sad and stressed-out little girls.

I’ve been thinking about an article I read recently, raising the question of why writers tend to whine so much about what hard work writing is. I’m not sure they actually do, but if so, one possible explanation is that a lot of non-writers seem to think there’s not much to it. Some may think that “having a book in you” is really the important thing, and all that remains to be done is throw down the words on the page, which pretty much anybody could do if they had the time, or knew someone who could give them some advice about how to get started, or had a ride to the local college to check out a creative writing class. It seems as if we’re all pretty much equal–the ones who have done it and the ones who are going to do it some day. “You wrote a book? Hey that’s cool–listen to this great idea I have!”

So what does this have to do with vaulting and bull riding? I think a far bigger reason writers feel misunderstood is that we make it look easy. The writer’s goal is to disguise all the hard work under a smooth flow of words and ideas, to make it seem delivered from Plato’s world of perfect forms by a toga-wearing muse. Gymnastics is like that too. Perfection is the goal–a flow of movement without any glitches. Rather like a flow of words without any glitches. We all know how hard gymnasts work to deliver that short burst of visible effort, but I wonder whether people understand it’s really like that for writers too. On the other hand, bull riding is about handling glitches while a crowd watches. A rider scores by staying on for “only” eight seconds, but the bull’s score is added to that, based on how tough the glitches were to handle. It’s not always pretty, and no one would ever say it looks effortless.

Being an author is a bit like lettering in both sports. Writing UNTIL OUR LAST BREATH and THE FOUR SEASONS took, I calculate, approximately 2000 hours of time apiece, spread out over a several year period. That’s an entire year of forty-hour work weeks, with two weeks of vacation. And quite frankly, I think that’s an underestimation. And then, when it’s there on the page, it seems as if it all poured out, with little more effort than it takes to read. I’m noticing this particularly right now, since I’m finally satisfied with a passage of about 1500 words from THE LAWS OF MOTION that took me just three hours to draft, but more than ten to revise. Okay, I hear myself whining. I guess the guy who wrote the article was right.

Serious writers bring everything they have to the task–their life experience, their passions, their research, a lifetime of learning from reading, their past successes and failures with the written word, and mountains of stubborn willpower to make it all come together on the page. We lay it all out there while we’re sitting in front of that computer screen, and sometimes it’s just as intense when it looks as if we’re doing something else entirely, like staring out the window or going to get the mail. A cross between bull riding and gymnastics. Now there’s a sport for you!