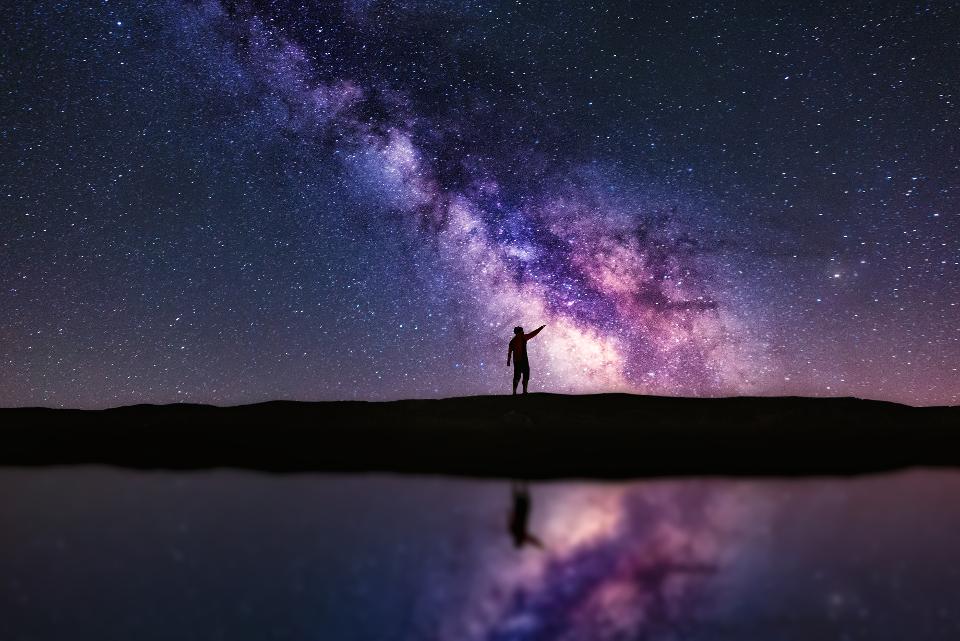 We can’t  begin to understand the concept of a billion—a billion miles, a billion years, or a billion dollars. The mind simply shuts down.  I have been told we can’t see more than five of any object before we have to start grouping to arrive at how many there are. So much for the crowning achievement of evolution—the human brain!

One of my favorite writers, Loren Eiseley, in “The Flow of the River” ( a strong candidate for the best essay I have every read,  in The Immense Journey, one of my all-time favorite books) speaks about the vastness of the universe, in which a billion is a small number,  and how that affects religious thought.  If we can’t comprehend the universe, how could we begin to comprehend a God capable of creating it?

The answer is, we can’t. I am not arguing that there is or isn’t such a God, just that our brains couldn’t grasp it anyway.  The Quiche Maya creation story has it that their deities created humans with perfect insight, but then took it away, so we would see and understand less.  Why?  So they would remain superior to us.

All of this adds up to one big question for believers, regardless of what they believe: How can deity make itself known to beings incapable of knowing it?  Some cultures believe it does this through natural phenomena like thunder or fire, and others see its hand in rewards or punishments.  No matter, really because either way (or another way altogether), these are all ways in which religious apologists would, in Eiseley’s words,  “bring God into the compass of a shopkeeper’s understanding.”

Painfully elitist in phrasing as it is (the book was published in 1946), Eiseley’s point is powerful. To think of God, should we choose to, we have to use the brains we have, and these are inherently too feeble not just for the shopkeepers but the Einsteins among us.  So what do we do?  We bring God down to a size we can relate to.  We can see divinity in a spring blossom, or a bronze statue glowing where thousands of hands have touched it, or in a baby’s first cry. We think for a moment, “Ahah! I’ve glimpsed it!” and that may be enough to make believers of some.

I used to teach World Religions and when we got to Christianity, I would bring Eiseley’s idea into the way I framed it. What if there really is a God like the biblical one, omnipresent and omnipotent beyond our comprehension?  How would that God speak to us?  We see an evolving answer in the Hebrew Bible. God speaks intimately to Abraham in a garden, directly to Moses but in a scary, distant way on Mount Sinai, then often in fiery anger through the prophets, then not at all, at least in words, anymore.

Get the picture?  God tried to convey what human responsibility is, by a few basic laws of behavior told verbally to Noah, then by carving a few more in stone, then by giving voice to the prophets, then—and here is where Judaism parts ways with both Christianity and Islam—God retreats into silence, as if to say, “I’ve had it with trying to get through to these knuckleheads,” leaving humans to sort through messages in the scriptures they already have.

And what follows is the means  by which both Christianity and Islam have derived their power in the human story. In these faiths, God indeed does bring it down to a shopkeeper’s understanding by sending an exemplar to walk among us.  “Here,” God seems to be saying, giving up on stone tablets and brimstone.  “I want you to act more like him.”

The light dawns.  Be loving, be just.  Every day.  That’s enough. That’s really what all the biblical words are about anyway. Even if you don’t believe either of them were sent by God, Jesus and Mohammad (may peace be upon them) remain model lives for millions.  The saints continue this tradition of human exemplars, their power deriving from the fact they they were people just like us, who put the will of God first.

So now here we are in 2020.  Is the next chapter in the story of God going to be that he gives up on the adequacy of even his best messengers?  The idea of loving one’s neighbor doesn’t seem to have critical mass today, and there seems to be little Jesus-like behavior among the loudest of the self-proclaimed faithful. There has always been a tension in America between the desire for personal liberty and the needs of the community, and while many—maybe even most Americans—are choosing community, right now advocates of personal liberty are on a rampage.

Is God going for a reboot? Is that what 2020 is all about? One last chance for us to pay attention?  If the perfect humans didn’t teach us anything, maybe a return to  fire and brimstone will—an Armageddon of disease, with climate disaster and rampant worldwide social injustice thrown in as well. Will this dawning horror teach us anything?  I wish I still thought so.

The will of the Biblical God is that love and justice prevail. Those of us who believe in that, whether or not we believe in that God, will have to stick it out until we win.  If we don’t, and if an omnipotent God does rule the universe, perhaps we will end not with a bang or a whimper, as T.S. Eliot suggests, but with a colossal shrug, and a new bit of clay in another Garden of Eden.