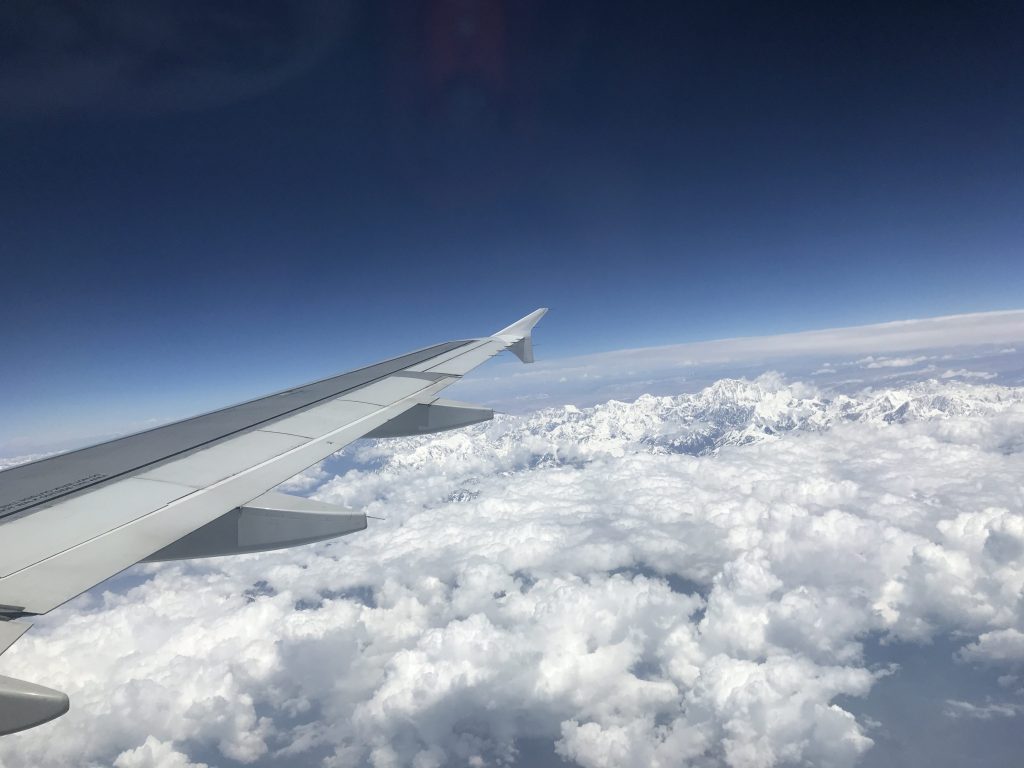 In my travels, I  missed several experiences I had hoped for. I had overnight flights that caused me to miss seeing the Andes and the Amazon Basin from the air.  “Sorry you can’t see Mount Everest at all today,” the captain said, when my friend Susan and I flew from Bhutan to Kolkata over the Himalayas, with the jagged tops  of a few peaks (shown here)  the only differentiation from the clouds socking in most of the landscape.

Fog or rain kept me from seeing the picture-postcard versions of some places on my dream list.  The giant Buddha looming over Lantau Island in Hong Kong was so fogged in I could see only its outline from the Po Lin monastery below.  A mountaintop in Bhutan, where on a clear day we could have seen the Himalayas in the distance, was socked in so utterly we could see only a few meters in front of our noses. The day I wanted to show my friend Linda some of my favorite spots in Riga, Latvia, we ended up sheltering (sort of) in a relentless downpour that changed our day into something utterly different than I had hoped for.

A few of these missed experiences led to something more mystical than what I had hoped for.  The Alps or the Sahara  Desert have lain below me as I flew, calling me through the darkness without revealing themselves, tantalizing me with an experience they would not let me have.

In the summer of 2000  I was at a very fragile point in my life, having lost my son Adriano to suicide at age 22 less than a year before.  In the letter he left behind, he talked about how he hoped death would liberate him to go surf the universe.  I took some of his ashes with me when I took the Norwegian coastal steamer on a research trip from Bergen to Kirkenes on the Russian border at the top of Scandinavia. My plan was to scatter the ashes at Nordkapp, the symbolic, if not actual, northernmost inhabited place in the world.   I had read that the glow of the Aurora Borealis is caused by light reflecting off dust in the atmosphere, and I thought it would be fitting if his ashes were part of the northern lights.  My eternal cosmic surfer—I would do that for him, and for me.

I had a vision of a clear day, where I would look out over the water toward the Arctic Circle and throw his dust skyward, but there were a lot of things that turned out not to be in keeping with my fantasy version of this moment.

Let’s start with the comical and then move to the sublime.  Nordkapp  was utterly socked in, visibility close to zero.  Not to be deterred, I went to the cliff edge  and started scattering his ashes anyway.  Well, if you remember a similar scene from The Great Lebowski, the updraft sent much of my first attempt back onto my jacket, my shoes and my face.  Not at all the way I pictured it! I figured out a better angle and threw the rest, which mostly plummeted down the cliff face in the heavy, still air.

Oh well! After wiping down as best I could, I went to the bar, which had a massive glass window designed to awe visitors with the spectacular view.  Nothing but a solid gray curtain of fog clung to the glass that day, Undaunted, I bought a glass of champagne and sat in the empty bar next to the window and said my son’s name out loud several times as a toast to hIs life and to my love for hIm. I cried. I cried a lot back then.

And I thought while i sat there that although I had pictured it differently, this  experience was a perfect representation  of where I was in my life. I knew the Arctic was out there. I knew the Aurora Borealis was out there. I  knew I had a future.  Another day, another time, I might see further and more clearly. I just couldn’t see anything right then beyond my own fog.

Memories of how things have come out differently than I envisioned  come to mind as I sit here in my condo in the fourth week of sheltering in place from Covid 19.  It’s a lot like sitting in that bar, knowing there is a reality out there, a future I am just not able to see.  But that’s okay.  I can be at peace with uncertainty and just let today be what it is.

On that day in Nordkapp, I committed the act of delinquency i am most pleased with in my life. I  finished the champagne and stole the glass to give to my son Ivan, along with the story that went with it.

All of life, I guess, is practice for what comes next, and memories  offer value in unexpected ways. And yes, I do believe that somehow my beautiful boy has found his way into the Aurora Borealis and that its light creates a path for him as I continue on earth to seek my own illumination.