I have just started writing the last chapter of THE SHAPE OF THE WORLD, and I 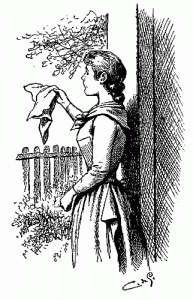 recognize the symptoms of meltdown that accompany this milestone.  I played tennis this morning, and almost cried a few times when I played badly, and dropped my racquet (TWICE!) in disgust when I played worse.  I didn’t throw the racquet–more of an “I give up” than court rage, but this is not me. I don’t do those things.  I can take just about anything in stride.

Except, apparently, finishing a novel.

Why is it so hard? In a week or less I will have a completed book on my computer (and external drive, flash drive, and email attachments–yes, I have learned  from experience about backing things up).  Why can’t I just say, “well done!” and make a dinner reservation somewhere?

I suppose it’s a cliche to say it’s like a child leaving home, but it’s true.  I’m not losing anything, really, except a period in life that was taken up with novelrearing. I like raising a novel, especially when it turns out as well as this one has. And it will be back. The good thing is that it won’t ask for money, it will bring some, and it will buy me a pretty nice present on my birthday.  But like parenting, it isn’t done for a long time after that first foray from home, and I will have lots more work before this one is out all by itself in the world of readers.

I have something I call the 60 percent rule: when you’ve finished the first draft of a book you’re about 60 percent done. That comes as kind of a shock to a lot of people, who I suppose have seen movies where a hand writes, “The End,” and the credits roll.  In this case there are revisions and then re-revisions and then re-re-revisions, and that’s all before it’s even sold.  Then there’s more, and more, and more until it’s too late to change anything.   Someone whose name the author probably doesn’t know says at some meeting the author isn’t aware of, “okay, I’m good with this,” and that’s how “The End” really gets written.

But I digress (I guess I really am in denial!).  It’s hard to say goodbye because it’s intense work to write a novel. It takes a sustained commitment to something that is not obligated to turn out well, and often may not seem headed that way. It’s mine.  I birthed it. It turned out!  It feels good to hang onto that for just a while before sharing it.

Beyond that, though, authors leave something of themselves behind when they finish a book, a force they can’t have back, and energy they have permanently spent.  Perhaps I’m in mourning for that.  Perhaps the end of a novel speaks to other finite things, like life itself. And then again, it’s hard to say goodbye when you’re having fun.  More than anything, that’s what being a writer is for me.