Today I visited the Iolani Palace, home to the last monarchs of Hawaii. It was really disquieting to see how clearly they had chosen western culture over their own. The palace had all the trappings of European court life—the velvets, and damask, and gilt, and really it could have been anywhere, except the royal faces looking out from the ballgown and military style dress in the photographs  were brown.

I get it. I just wish it weren’t so, that the palace was something less European and more like the fabulous  palaces and lavish surroundings of the great Asian courts. But of course these were already flourishing before westerners came along, and the emperors of China or Japan were hardly likely to say, “wow, thanks for showing us how royalty is supposed to live.”

It made me a little sad to roam around the Iolani Palace and contemplate not just how much of the indigenous culture the royals had willingly.sacrificed, but the betrayal that was to come. Indeed, the daughter of the king who built the palace would be the last monarch, deposed by westerners she and her forebears had so desired to emulate.

I had to breathe, so I ducked out of the palace and saw this hula group practicing on the grounds. Now there’s a twist. Coolness has traded places. Western wannabes?  Forget it!  This class, a mix of innumerable ethnicities and backgrounds, just want to claim a little  of their “inner Hawaiian.” I bet Kamehahmeha and his descendant kings and queens would be pleased. 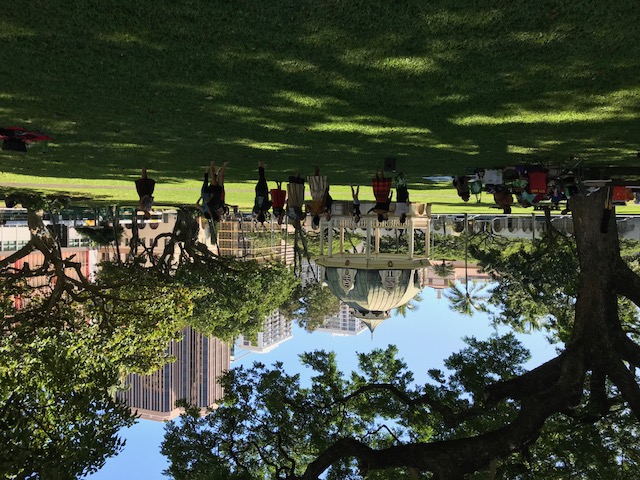