One time when I was growing up, my sister and I, newly old enough to stay home alone 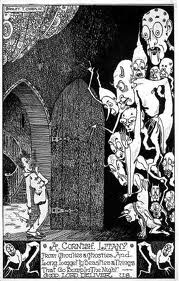 for a few hours, were “terrorized” after dark by a neighbor on the front porch dropping off something he had borrowed from my dad. We stayed huddled in the bathroom for what seemed like an eternity until our parents got home, arming ourselves only with a flashlight we planned by some childish logic to defend ourselves with if the intruder broke down the door.

At least there really was a presence outside–unlike later, when I would cower in bed after watching a scary movie, convinced that whatever had menaced the characters was about to get me.  Why is it that the typical and familiar “things that go ‘bump’ in the night” are transformed into something diabolical just by the act of storytelling?  Try as one might to rationalize that watching a movie does not compromise one’s safety in the real world, that a monster or psychopath isn’t lurking out there ready to pounce on the hapless soul with the misfortune to have just watched something scary, it just never seems to keep the fears at bay.

There’s something equally irrational about writing under the kind of personal stress I have been facing since my partner, Jim, was diagnosed with metastatic prostate cancer.  I was finishing the first draft of a new novel as the news was unfolding, and it has caused me to look at my work with some of the same fears–fears that try as I may, I cannot dispel with logic, or a heroically wielded flashlight.

I don’t know whether to trust my writing anymore. We’re talking about words written before I even knew Jim was ill, so it’s not like I could have been shellshocked as I typed.  I remind myself that the manuscript hasn’t changed just because other things have, but somehow I feel more vulnerable and confused, more doubting of my ability to judge.

What’s weird is that I can’t figure out what I am worried about. There’s nothing about my writing future that is at stake here. I don’t have a deadline looming.  I don’t depend on the income (thank goodness!) With three published novels, I don’t have any goal I haven’t already achieved.  I think my anxiety isn’t about my writing at all, really. It’s about the great unspeakable behind all this. The D word.  The one with five letters that rhymes with breath.

There’s another “D” word relevant here too: Displacement.  Maybe that’s what’s going on–I am acting out in one sphere what is freaking me out in another.

I tell myself that it is my choice whether to let the future ruin today.  Just live. Appreciate.  Be thankful. I’m hearing myself pretty well most of the time. It’s the bogeyman of uncertainty that’s got me.  What’s certain is that the man I love, with whom I have had one of the best chapters of my life, cannot be cured.  What’s certain is that, unless something unexpected takes him from me even sooner, the expected will take him soon enough. What’s uncertain is all the details. Will he be strong and enjoying his life a year from today? Two years?  How long until he wonders whether it’s worth it to soldier on? How long until I will be alone?

Yes, I know nothing is ever certain, and some kinds of uncertainty are good and even productive. Sometimes what we don’t know truly doesn’t hurt us.  This is not one of those times. At least I don’t think it is, unless the future is uglier than I think, and I’m not, repeat NOT, thinking that.

So I’m taking it out on my manuscript, wondering whether words–or events–will ever be the way I want them again. Writing is something I can control, though, at least a little, and even as I type this, I long to escape into it. Time to put down the flashlight and come out of the bathroom armed with nothing but a story. No need to utter a frightened “who’s there?”  It’s only me. And I don’t like any of this.  Not one bit.