A few weeks ago a high school friend put out a message on Facebook, asking if anyone might by chance be available to be a last-minute replacement for her daughter on a trip to the Middle East.  When it turned out that I would be done with spring semester in time to meet her for five days in Cairo at the tail end of her trip, she threw in the frequent flyer miles for the airfare and the extra bed in the hotel, and I was hooked (and booked)!  Now, just about a month after I first heard she wanted a companion, I am already home reacquainting myself with the experience of ten time zones’ worth of jet lag.

I went prepared to be dazzled by the pyramids, the Nile and the Egyptian Museum, and indeed I was, but as usual, it is the unexpected things that make the most lasting impression.  One of these is so relevant to my writing that I want to share it here.

We took the Cairo metro several times during our stay (we should be so lucky as to have a subway so clean, orderly and modern in our own cities!), and for the first few rides, the experience was typical. Men, women, and children shared the cars we rode in, and though most people minded their own business, the men, to put it politely, checked us out far more extensively than seemed warranted.  Then we noticed a sign for a women-only car and decided to hop aboard next time.

The experience was extraordinary.  While people in the rest of the cars traveled through 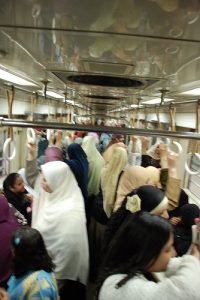 Cairo quietly wrapped up in their own private worlds and ignoring each other as much as possible (well, except for the stares), the women’s car was lively with conversation and laughter.  When women looked at the two of us, they often did so with a smile.  It was so pleasant and wonderful to be there, part of an instant community of people who, though strangers, know something about each other through the common experience of being a woman.

I understand there is some controversy among the people of Cairo about whether there should be such cars, but I won’t go into the various arguments here.  What sticks with me about the experience is how well it illustrates the underlying point of all my fiction.  There’s a richness in women’s lives that only comes out when they are among themselves.  Though I wish we lived in a world of greater equality of the sexes, there is something precious about the space women carve out for themselves in male-dominated societies.

There’s an analogy to be drawn between the paucity of information about the daily lives of women in the past and the women in those subway cars in Cairo. For centuries men have been the arbiters of what was (and is) important to record and remember about their societies, and the result is that almost everything about the world of women goes unnoticed.  Men concentrate on the activities important to them, i.e. the cars in which they are riding. All the while, out of sight and perhaps out of mind, women rattle along on the same train, making another world with just each other. We always have, and we are very good at it.

That’s what I want my books to convey, and I am grateful for those cars full of women for giving me such a beautiful image to keep in mind as I try to bring characters to life from cultures that missed the train altogether when it came to valuing what the women were thinking, doing, and contributing.

PS–I didn’t take the photo included here, because I figured out that many Egyptian women really would rather not have their picture taken by strangers. This is a shot I found online.