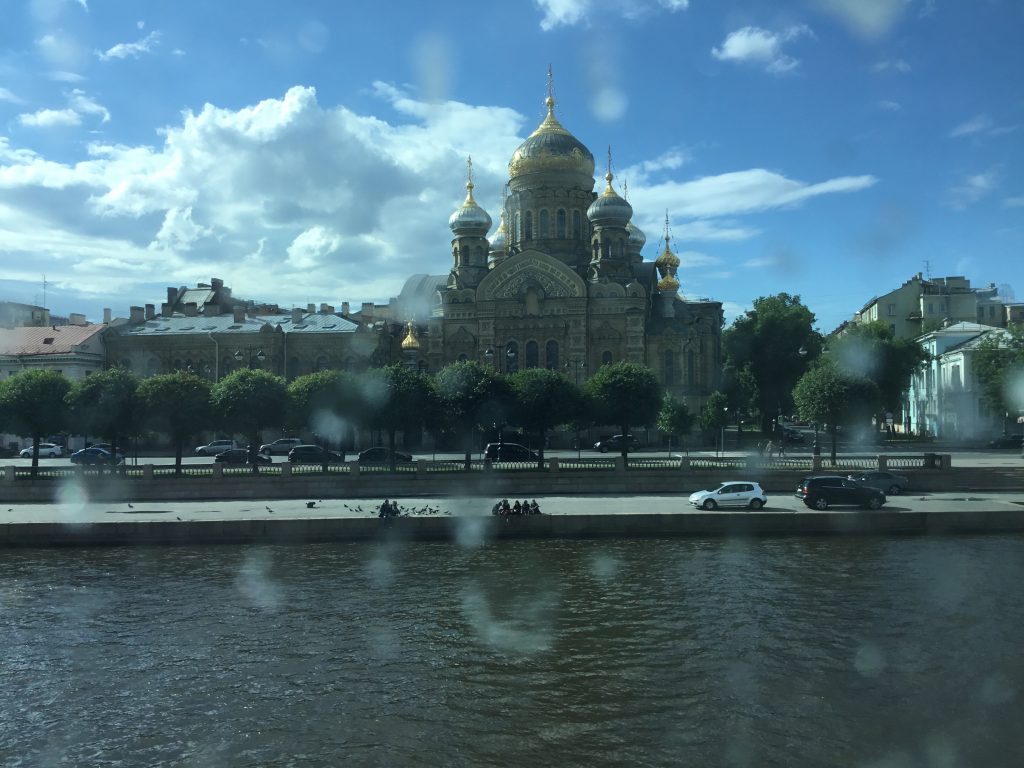 Russia is complicated.  In so many ports, one can avoid asking hard questions.  In so many other ports, one can simply be charmed.  St. Petersburg  maybe be impressive, even beautiful in parts, but it is not charming, even when one looks out to a view like this through my window ( the white marks are from this morning’s rain shower). Russia hasn’t ever tried to charm. Everything about it, from the massive buildings to the ferocious, barely survivable winters, seems designed to intimidate.

I have read that the shape and the gilding on the domes is to make them resemble flames from lit candles, reaching to the heavens.  The St. Uspenia  monastery church in the photo seems to me to be staring straight ahead, stiff and formal, not built at all for the benefit of the souls of the Russian people, who, according to Tolstoy, have “an infinite capacity for suffering.”  The passersby don’t look at it either, so I guess the church and the people of St. Petersburg are even.

If I had a Russian visa I could be over there right now , but like so much about dealing with Russia, it’s just a whole lot of worry and trouble to get one.   Without a visa, I can only go on tours to places they want to take us, led by a guide the government has vetted. It a pleasant prison on  the the ship to be sure,  but we are, in a sense, incarcerated here in the middle of St. Petersburg, apparently too much of a threat to allow out for a walk.

What harm would a stroll on the Neva  River embankment do?   Pervert the minds of those people over there with my command of Russian scarcely going beyond “da” and “nyet”? What are they so afraid visitors will see? Who are they so afraid their own people will meet?

I could throw out some oversimplified pablum here, but I don’t trust my own thoughts all that much.  They are lied to. But haven’t I been? Their place in the world and relationship to it has been distorted. But hasn’t mine?

These people can walk on that embankment because they are  Russian.  They got by birth the whole package—the winters, the governmental cruelty, the infinite suffering, the constant reminders of how small they are, as measured against the towering churches and palaces.  They also got  the ability to exercise the small freedom to go for a walk on a beautiful afternoon. Be at peace, all of you out there. I wish you well.

I got something different in life, something incomparably better.  I can travel far beyond this embankment. I can see things for myself. Except for here.  But even here they can’t stop me from seeing  some things about Russia pretty clearly for myself, through my spotted window.