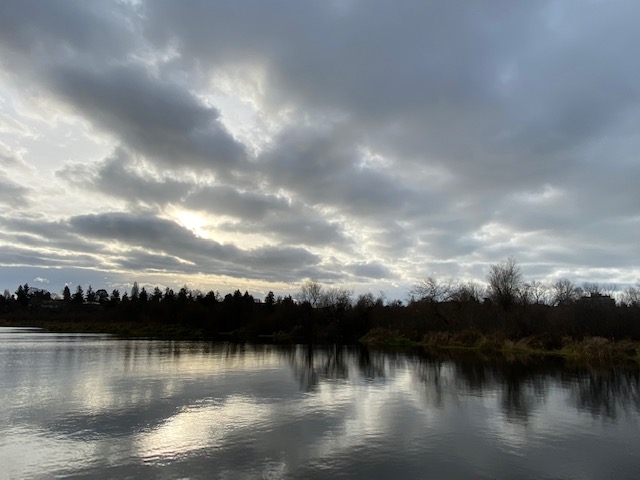 The first time I tried to explore Swan Lake in Victoria was a collection of mishaps. I thought I knew how to get there and spent about a half hour unintentionally touring several neighborhoods in Victoria. When I finally got there, I took the wrong path and dead-ended. By the time I was on the right path it was starting to rain, and the only washroom, which by that point I desperately needed, was in the Nature Center, locked up tight on Sundays.

I vowed to return, and I did so today, one week later, for a lovely amble around the perimeter of the lake. The name Swan Lake conjures up images of dancers in tutus, and of course there were none of those, but sadly no swans either. I had to settle for a number of very friendly ducks, and a variety of birds hopping and perching in the thickets along the path.

The sun hugs the horizon at the winter solstice this far north for the eight hours between sunrise and sunset, and even on a day free of rain, the light remains low all day. Perhaps it the drama of sky and shadow that sets the mood for thoughts about beginnings and ends and how, just as the Dao teaches, each contains the seed of the other.

Fall lasts a long time here, but at some unnoticed juncture it was over. The trees are bare now and their fallen leaves are brown with the rain that has left them limp and flattened on the ground. In the past I have found this mass of slippery, gluey detritus quite unappealing, but today my mind opened to a greater appreciation of the season one of my favorite poets Gerard Manley Hopkins described as the time when “worlds of wanwood leafmeal lie.”

It is hard to square those exquisite, perfect words with something naturalists call “leaf litter” and gardeners give the quintessentially unpoetic name “mulch.” But it is only our species that needs words for it at all. For the tiny creatures that call it home, and for the plants that produced it and will use it again in a never ending cycle of transformations, it is simply what the moment offers before moving on to something else.

If I felt poetic today I might write an “Ode to Mulch,” to give it the honor it deserves. Instead, I will acknowledge that we exist in different realms, one in which I struggle to find meaning and to set it down in words, and the other, which just is. As Hopkins says in another poem, “these things were here and but the beholder wanting.” Of course it wouldn’t be poetry if it didn’t suggest more than one way of thinking about it. The beauty he describes in the poem couldn’t care less if any human being beholds it. But from the human perspective, we have all probably said a million times, when we just stop to watch and listen, “wow! I never noticed that before.”

And so it is with the wanwood that leafmeal lies. Now, at the solstice, at a time where time cracks open to allow rebirth, personal vows take on potency. Mine is to be a better beholder, starting quite literally with what is under my feet.