Life has a way, doesn’t it?

It’s been a little over a year since I lost my beloved Jim to cancer, and exactly a year since I moved into a shabby-chic little rental near the San Diego Zoo.  I kept to my routine I established when I lived with him downtown near the bay, of walking to the college where I teach, passing every day by the rose garden that was one of Jim’s and my favorite stops on weekend afternoons. 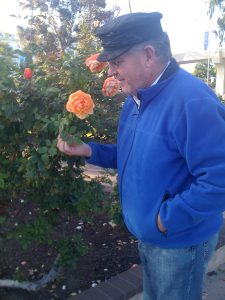 I sprinkled some of his ashes under many of the rose bushes, and for several months I could still see signs of them under one yellow and one white rose bush. I have paused in front of those two bushes coming and going over this past year, just to say hello, catch Jim up on my life, and whisper my appreciation for him.

I think there is something profound about the idea of mourning for twelve months and a day, because getting through the anniversary is such a big step.  I have now done without him all holidays, birthdays, memories of special times, and have relived the pain of those last days and hours.  Slowly, I have moved on, found my balance, retrieved the spring in my step. Little by little I have found there is less to say when I stop, though I always brush my lips against one of the roses which have taken in what I brought of him to that spot. Amazing how much rose petals feel like lips, and how truly I felt kissed back.

I don’t cry anymore when I talk to Jim. The vision of him in his sailor cap smelling a flower is dimmer now. That’s all right.  It all still really happened.

Sometime this spring I learned that I would need to sign another year lease where I was living. Since I hadn’t planned to stay, but didn’t want to buy anything while I was unclear about my life, I decided the time was right to make the commitment of buying a place of my own.  Last week I moved into a beautiful one-bedroom condo on the other side of Balboa Park, with a spectacular view of downtown, the bay, Point Loma, and the ocean beyond.

I won’t be passing by the rose garden anymore, though I will be making the occasional special trip.  Instead, I bought a large armful of beautiful artificial yellow and white roses to put in my new home.  No, they don’t kiss as well, but they are a way of saying that we never completely say goodbye.

Perhaps, though, it’s a good thing for both of us that my move created a natural end to my stops in the garden. Jim, you are free to take on the universe without worrying about me anymore.  Now I am free to take on the other side of the park and the life that goes with it.