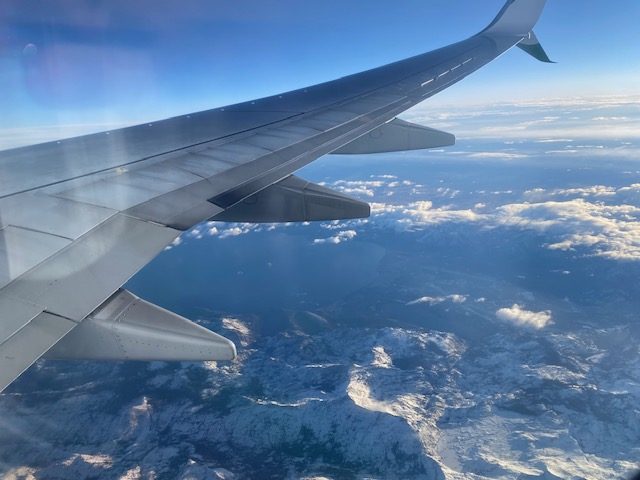 I have always had this secretive side that loves anonymity, invisibility, stealth. When I am driving home from a trip of any length, once I get close, if I stop at a store or gas station, I get pleasure out of the thought that no one knows where I had been or even that I was gone at all, because I am back where I usually am.  I love this secret life, of sorts, weird as that may seem.

I am having a day like that today.  Unknown to all but the few people I had to cancel plans with, I am on a plane flying over the Sierras on my way back to Victoria, a week earlier than planned.  The photo is of somewhere in the Sierras, with beautiful examples of aretes, mountain tops in which the weight of snow has pulled the rocks down on both sides over eons of time, forming sharp wedge-shaped peaks (I love imagining geological forces as I fly.  Don’t sit next to me unless you want to hear all about it!).

The news in Southern California is so bad on the Covid front, that both the risk of infection, and the possibility that travel could get more difficult gave me pause. Then, Dan got a mild but scary sore throat  a few nights ago, and though it was gone by morning, it got me thinking about how I would handle exposure, or worse, infection.

Four months ago I  ripped up the contract on my life in San Diego, and set out, unencumbered, into a new life. I haven’t looked back and I don’t regret it, but there are ways in which such a massive simplification makes things, paradoxically, more complicated. People with a permanent home, for example, have a familiar place to be while dealing with Covid exposure and illness.  They close their front door, hop in their own bed, gather their things around them, and wait it out.  My life isn’t like that.

If Dan had indeed gotten sick, I would not have been able to return to Canada in the foreseeable future. Even  if I didn’t get sick, I would have been exposed, and couldn’t fly.  I would have had complications at the border.  If I had gotten sick, who knows how long I would be symptomatic or contagious?  Monetarily, it would have been a huge hit because I would have paid for a rental in Victoria that would be sitting vacant.  Everything other that the few clothes I brought would sit in storage.  My car would linger indefinitely  in a parking lot near the airport.   And meanwhile, if Dan had gotten sick, I would not want to stay in his condo on the off chance I could reduce my exposure enough not to get it myself, so I would be paying for another rental near him and living with only the few things I brought in one suitcase.

I am a “don’t worry, be happy” kind of person, but I tend to listen to that bird on my shoulder that has helped me make many of my best decisions, and I decided to choose the path forward rather than stay in place. Almost  every one of the things I was anticipating with pleasure to this week in San Diego has been canceled anyway, out of an abundance of caution, and with a new writing project I am eager to start and would be difficult to work on perched in Dan’s condo, it just seemed better to trade one seclusion for another.  I found a small house on a lake in a suburb close to central Victoria, where I will sleep tonight and remain quarantined. There’s a yard and a dock on the property, plus a cozy but not too small living space, so I think I will be quite comfortable and productive.

It’s sad though, and today I am very, very mad at Covid, and its enablers, from the worst president in history to the unmasked nay-sayers who think they are saving democracy.  I had such a good visit to San Diego, had a great time with Dan (including an early Thanksgiving dinner this weekend), and with the friends I got to visit. I hope all of us can soon stop facing similar dilemmas about where to go and whom to see, and that we can have our lives fully restored to us, but will have grown wiser and more compassionate for the experience we have shared this year.  Happy American Thanksgiving Week!