I’m off tomorrow to New York to do research for my novel-in-progress.  I get asked sometimes about what I get out of going to the places my books are set–other than a great vacation!–and the answer may be a bit surprising.

Historical novelists rarely get to visit the places they write about, because those places aren’t there anymore.  I learned this most dramatically last summer researching THE SHAPE OF THE WORLD. The interior of the cathedral in Sevilla contains almost nothing–from chapels to altars to decorations–that would have been there when my heroine attended mass.  Granada is filled with a great deal of beautiful architecture, but baroque buildings have replaced medieval ones.  The palace where Isabella spent her childhood has not a remnant remaining of it.  You can get a sense for the warrens of medieval streets and countless tiny squares in some parts of the city, but I often feel a little bereft of what I am hoping for.

Rural locales are better.  The countryside probably hasn’t changed that much at least in places, and the plants and animals are presumably the same.  I get color from this–kinds of flowers, butterflies, shapes of hills–and the books are always the better for it. I had no idea, for example, how truly rural much of the Champagne region of France is, and I was  able to build that into FINDING EMILIE.

The main thing about going to the sites is avoiding awful mistakes.  Whoever said the devil is in the details must have been a historical novelist.  I had my heroine in THE SHAPE OF THE WORLD looking out across some hills to the sea and discovered that despite the proximity to the ocean, there was no sea view there. I like to avoid having characters watch sunsets out of north facing windows, or cross bridges that aren’t there, or not cross bridges that are. This is especially important for places that many readers may have been to.  One doesn’t want to get details about Paris or Venice wrong!

I do have have characters do things like stop at ruins I didn’t know existed until I saw them, or spend the night in a town too minor to make the guidebooks. One good part of travel is getting special details like that. I discovered, for example, that Sagres, where my heroine in THE SHAPE OF THE WORLD spent several years of her childhood, is unbelievably windy all the time–something one wouldn’t know from pictures.

I’m a college professor, so I can’t simply decide to take a trip when it suits me.  I need to go in summers or on winter break, so it’s not a matter of going before I start writing, or when I’ve finished a draft, or any other specific point.  At first I thought it would be best to go before I started writing, to soak up the flavor of a place, but it didn’t work out that way, and I think now that would have been a mistake. I can only afford to go once per book, and it’s working well to go after the first draft is done, or close to it.  That way I know very specifically what information I need.

I know where all the scenes are set, which makes it easier to put myself in the story. I stand in a garden and try to hear the characters talking.  I drive down a road and imagine what it would be to galloping on horseback. Even if I have to peel away the new housing development to see what was there before, or ignore the cars on a narrow cobblestoned street, I am there, letting it all soak in.

How much difference does travel make?  I’d say the books are ten percent better because of it.  Fiction still needs a great plot and wonderful characters way more than anything else. I’m about two-thirds of the way through the first draft of my new novel, tentatively called BREAD AND ROSES, and I have a very good sense of every local I need to go see.  I won’t see Jewish peddlers on the Lower East Side, and it will be tourists crowding the Registry Hall at Ellis Island, but I’ll do what I always do:  pack light and take a good imagination. 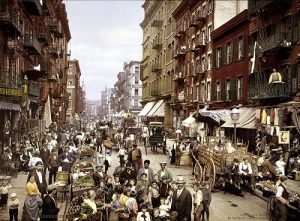