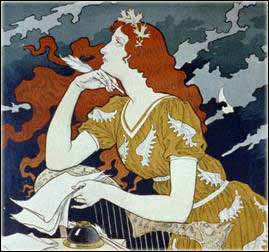 invited to, but I do have to laugh at the rather glamorous view a lot of people have about  a published author’s life.

Most don’t ask how much money authors make, though I suspect some are dying to. When I explain how little the royalty is on an original paperback, after the agent fee and taxes are taken out, they are always disappointed, because it’s easy to see you have to sell a lot of books to make a eye-popping or even a quit-the-day-job amount of money.  “By the hour, you’re far better off babysitting,”I tell people who really want to know, but of course it isn’t only about money, and I know that. People hold authors in great esteem, and that doesn’t vary that much, I imagine, by the size of the royalty statement.

I’m not sure what people picture when they imagine writers at work (maybe something inspirational, like the image here?) but my guess is it has a least a touch of class. I can speak for myself at least, and say that if I look halfway decent at the keyboard it’s because I’ve either been or am about to go somewhere.  Many times, I look up and see its 6PM and I am still in my running clothes from that morning (though at least the sweat is dried) and I have barely enough time to take a quick shower before my sweetheart comes through the door.  I can picture the look on his face as he thinks “wet hair again, huh?” although all he says is “it must have been a good day.”

I am thinking about this today because PENELOPE’S DAUGHTER is coming out in less than a week, and everyone is commenting on how excited I must be.  Those who are authors themselves might be more inclined to say they know how exhausted I must be.  Yes, it’s very exciting, although less so than for the first book where I was waiting to become a published author, and one day would throw the switch from “no” to “yes.”

This last few weeks has been grunt-hard work, with guest blogs and Q&As to write, links to make with other writers on line, requests for interviews, requests for appearances, emails I have to send and answer, and just one thing after another for days on end.  Sure, it will pass. I’ll get back to my regular rather overworked normal, and then, after a few months to breathe, it will start up again for FINDING EMILIE, out in May 2011.

I wouldn’t trade this author’s life I’ve made for myself, but sometimes I wish I could scribble myself up a character who would do some of this work for me. Maybe I could ask that pretty lady over there on the upper right of this entry. At least she looks as if she’s had time to brush her hair.