I’ve been gone for three days getting to know Vancouver Island a little better.  The way I dragged myself into the motel the first two nights, I assumed this morning in Ucluelet (about halfway up the west coast of the island), I was facing a loooong day getting back to Victoria.

To my surprise, even with a stop for about 45 minutes to walk along a lake,  it  still took a little under five hours to drive the roughly 180-mile distance. Maybe that sounds like a lot, but to someone born and raised within a few miles of a California freeway, five hours is just not that long a drive.  The thing that is so strange is that in my first two days, the ones that wiped me out, I only traveled half that distance each day.

Well, I did take a few detours, and I did make a few stops to hike trails each day ( including today on my return).  I tried to see as much as I could of what is on the short list of must-dos for this part of the island, so I saw a half-dozen lakes, a grove of redwoods, waterfalls, rivers, rugged sea coast, beaches, and a couple of lively little towns.

Yesterday was frustrating because several parks were closed due to concerns for social distancing during Covid. I didn’t find either of the well-known west coast towns of Tofino and Ucluelet particularly interesting, and concluded that the problem was my expectations. I thought of myself as driving to Tofino, as if it were the destination, when in fact it just happens to be the town at the end of a remarkable drive.  One of those times when the adage “it’s the journey, not the destination” rings particularly true. Fortunately, I had been practicing gratitude all day for the beauty of the island, so as long as Tofino had ice cream (it did) it was okay by me.

For all the frustrations of yesterday, the other two days were one knockout after another.  I picnicked at a beautiful lake and walked the Kinsol Trestle (see photo below). 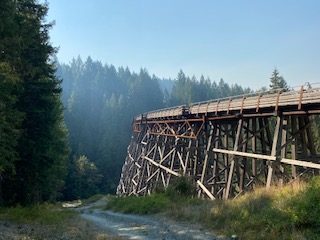 I had a great room with a killer view, and one of the best farm-to-table meals ever at a tiny restaurant  in  Qualicum Beach, followed by a twilight walk on the inlet. 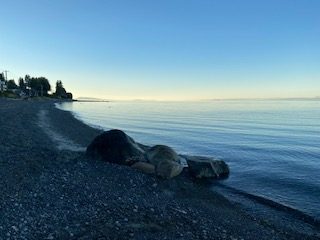 I added Qualicum Beach to the growing list of places I might want to live for a month or two, then set off the next morning for the west coast ( here, to go very far up the west coast you have to drive up the east coast, then across the island). I stopped for about an hour to walk to the Little Qualicum Falls 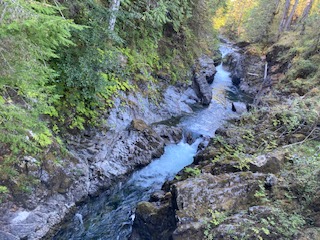 then at Crawford Lake for a break from seeing the beauty only as I hurtled past in my car. 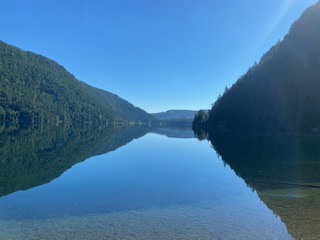 The frustrations began at that point, with an old-growth forest trail with a stand of massive redwoods (closed) and a beach and tide pools (closed).  This morning, refreshed, I decided to try again at about 7am to see this fabled stretch of coast,  and I found a trail I walked for about an hour before hitting the road for home.  The sound of the waves, the seals, and the old lighthouse horn was just what I needed to turn my attitude from disappointment to glory hallelujah. 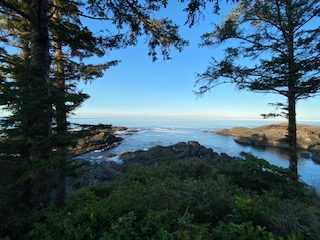 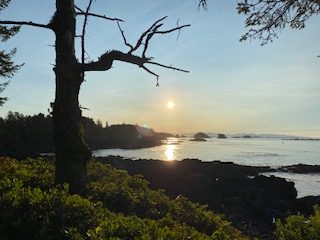 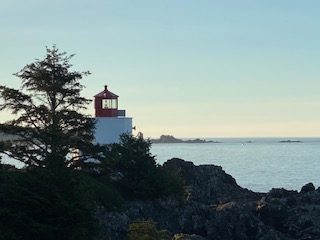 Sometimes a little voice tells me, “here’s a good place to stop,” so I pulled off the road into Sproat Lake Provincial Park.  Wow!  It turns out, totally unknown to me, the best preserved petroglyphs in British Columbia are there, so I walked the half-mile or so to see them on a rock wall at the water’s edge. 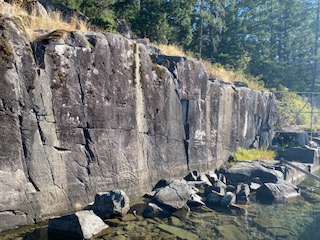 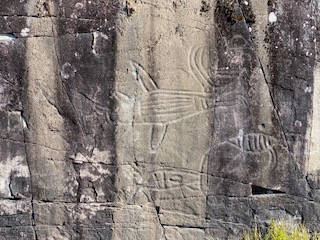 They are so  beautiful and conveyed so vividly the former world of the First Nations people who had lived by this lake that I almost expected to turn around and see  their canoes gliding on the water.

Oh, and one more thing.  As I was walking back I heard loud bird noises and looked around for what was going on in the treetops  then I realized the sound was overhead, and I saw my first-ever migrating geese.  Okay, okay, I can hear some of my friends laughing, but with rare exception, in the waterfowl category,  I have been stuck with seagulls and the occasional heron most of my life.

So back to what I started with—how unburdensome the drive back was.  It always seems as if the first time you go somewhere it feels so much longer than coming back  I suppose mostly it’s the removal of the unknown on the return trip.  I found myself thinking, though, about how I would feel if I drove this route all the time.  It’s hard to imagine familiarity ever breeding contempt, as the expression goes, when it comes to natural beauty,  but I wonder if after a while one notices less, or if the opposite occurs, that there are so many things to love, so many things to sink into one’s heart and soul that every turn in the road is like a little homecoming.

I have loved a place that much—the only place in my adult life that ever really felt totally like my home, in any deep sense of the word.  Those of you who have known me a long time know I am referring to my house in Lake Arrowhead,  in the San Bernardino Mountains.  For years, every time I drove up the mountain road, my grin  got too big for my face, and my heart sang at the sight of every familiar landmark.  It never got old, not even a little.  Perhaps I will have another chapter like that, perhaps not.  But for now, I can say that I have felt very much at peace already on this beautiful island, helped along by the knowledge that peace starts with being at home wherever you are.