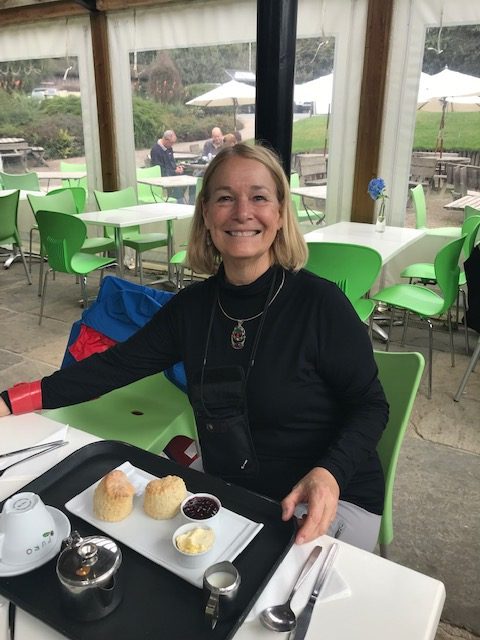 Often people comment on how footloose and fancy free my life is, and often I wonder whose life they are talking about.  I am traveling the world, to be sure, but as that expression goes, “wherever you go, there you are.”

I bring my personality with me everywhere, and most of the time it serves me well. I am optimistic, resilient, and good at seeing things from multiple perspectives.  I can fairly easily see the good in people and situations, and when I am disappointed I can shrug things off fairly easily as life lessons.

Reluctance is a word I have never seen in the plural, so I will invent it here. I have a few reluctances that have made me less able to enjoy this traveling life as fully as i would like.

First, I am reluctant to take any risks in port that might cause me to miss the ship.  Of course it makes sense to not want to be stranded, especially in my role, where it would affect me professionally as well as personally.  I don’t have any problem choosing not to do utterly stupid things,  like going far from the ship with only a dicey plan for  transportation back, but I sometimes am prone to being too cautious.

And sometimes I’m not.  I met a couple who live in Bangkok who told me if I was ever there, they wanted to show me around.  I had a stop in Bangkok, and we set a plan months in advance, not realizing that the ship would have to dock about forty miles from the city. My friend, who is an airline executive and the owner of a travel agency, said not to worry, he would send one of his guides and drivers to meet Dan and me and drive us in.  We had a fairly short port call, which meant that we would only have a couple of hours in Bangkok.  There were tours going into the city, and of course if they were delayed, the ship would wait for them, but it’s tough luck if you go out on your own and don’t get back.

Dan wanted to cancel, given that traffic was unpredictable, and I might have gone along, except that Charin, my friend , had gone so out of his way to make it happen, and geez, it’s Bangkok!  We would otherwise have spent the day in a boring container port with nothing to do.  So I decided to go, and Dan decided that since I was going, he was too.  Maybe he was thinking it I missed the ship he would rather be stuck with me than sailing off without me.

Anyway, Bangkok was fabulous. I can’t wait to go back and see more.  We had an abbreviated city tour, a great lunch , and then we were on our way back.  We got to the ship with only about a half-hour to spare, and if traffic had been heavier, I doubt we would have.  That close timing was in retrospect a good argument for reluctance on the stop in Bangkok, but I am glad I didn’t let my cautious side prevail.

It’s little things that get me annoyed with myself.  Yesterday was one of those times.  We were supposed to dock in Greenwich but because of weather conditions ended up further down the Thames at Tilbury.  Because it was an embarkation and debarkation day, there wasn’t a regular shuttle transporting guests into town and back, but a special intermittent shuttle to pick up and drop off people in Greenwich who were planning to begin or end the voyage there, and now had to deal with the changed plans.  I decided to hop on the shuttle to explore the town, but as I waited on the shuttle bus, I semi-seriously considered getting off and spending the day on the ship. As we were pulling away from the ship, I felt that glimmer of dread that I had just voluntarily created a situation where it was not  completely in my hands to get back to the ship on time (i.e. walking distance)

”What have I done?” I asked myself as we drove away, and ruminated much of the drive about how many backup plans I could put in place to get back the twenty-odd miles to the ship.  At the other end, I didn’t leave the shuttle stop point until I had heard from about three different people exactly where I needed to be and when.

Then I was fine. I had a fun time wandering around the town and got back just fine, but not very happy with myself for ever having built up such a simple jaunt into an imaginary crisis. I’ve got to keep working on that reluctance, but I remind myself that yesterday I did indeed overcome it a little.

I made some progress on my second reluctance yesterday as well.  Let’s call this one Culinary Reluctance. I don’t have a cast iron gut, and even less so as I get older.  I will spare the details, but it comes down to being generally very uneasy  about  eating food off the ship. I watch these shows about great street food, and I am so envious, but I just don’t dare.

Now that I am on ships so much, I get really tired of the food onboard.  In St. Petersburg this summer there was a Siberian cafe just across the street from the ship and after trying mushroom ice cream there (surprise yum) and rye bread and honey ice cream (another surprise yum) with my Russian friend Tatyana on my last stop in St. Petersburg for the season, I have vowed I am having lunch there or elsewhere every time next summer when I do the Baltic again. Likewise I have made a resolution to have lunch ashore at least sometimes in every port, just to make sure I am not missing out on the highlights of a visit.  Yesterday in Greenwich, in addition to taking the shuttle, which I described above, I decided to live up to my new promise to myself, so I stopped in a pub and had fish and chips and a pint of lager.  Yes, indeed I did! 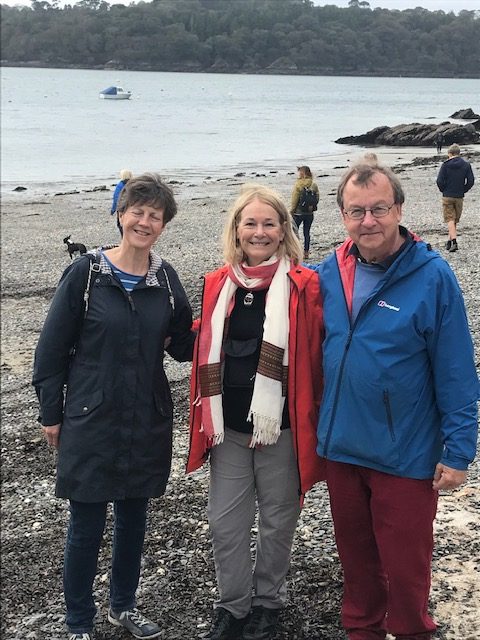 Today I had another great day, this one with very little trepidation, because I was in the care of friends Peter and Sue, with me here. who live in Cornwall not too far from our port in Falmouth.  They picked me up and took me to a beautiful garden with paths that meander down to the sea.  What a great outing it was, and I even had soup and a scone without worrying about it. You see me at the top of this post, ready to dig in!   I am now back on board, and on my way to being a better, braver Laurel!