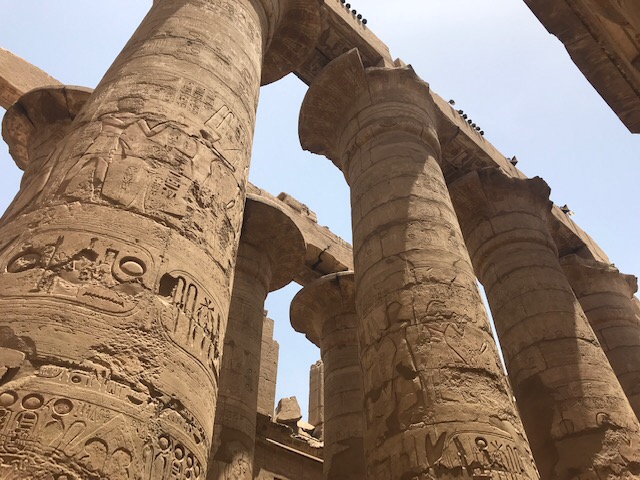 Several days ago I went on a shore excursion from the port of Safaga, Egypt, to Karnak Temple and the Valley of the Kings and Queens in Luxor.  Despite the long bus ride (3.5 hours each way), this had been the most eagerly anticipated event of my entire assignment from Mumbai to Athens.

I was lucky enough a number of years back to go to Cairo and Alexandria, but wondered how in the world I was ever going to manage to get farther south to see the great monuments of the New Kingdom, particularly Karnak and the Mortuary Shrine at Deir al Bahri of one of my heroines, the Pharaoh Hatshepsut, who was chiseled out of the historical record  for the audacity of having been a woman on the throne.

This unanticipated chapter in my life, when I can spend pretty much all my time exploring the world, has taken me so many places that, quite frankly, I would never have been able to see on my own dime.  It has also given me the ability to focus my money on side trips between cruises to places like Bhutan and New Zealand and on longer stays in embarkation and debarkation points like Hong Kong and Singapore.

And it’s not over yet.  Insha’Allah (If God wills it), as my Muslim friends say to avoid sounding cocky about the future, I have another nine months of pretty much full time traveling ahead before I plan to scale it back at least enough to make it worthwhile to reclaim my condo from the renter and my car from my son and live at least a slightly more settled life.  Maybe.  Who knows?

This is a long preamble to the modest point I want to make in this blog post.  I have, in at least one post, focused on what is clearer  about myself since I began My Year(s) of Living Travelly. One thing I already made note of was driven home more forcefully in my short time in Egypt.

I came on this excursion to be bowled over by Karnak and by the tomb of  Nefertari, recently opened to the public after a major, state-of-the-art restoration.  Both lived entirely up to expectations.  But what I found myself most moved by, and thinking about the most in the days that followed, was what I observed about Ramadan from the window of the coach.

We happened to be there on the first day of Ramadan, and were told not to worry, that it should have no impact on our tour.  And the shore excursion folks were absolutely right about that in one sense.  Nothing was closed, nothing slowed down.  In fact one of the strongest features of this month of daylight fasting is that life does go on.  People were doing their jobs, from standing sentry on the highway, to  carrying hay on a donkey cart to their animals, to selling produce to people who were preparing the dinner that would break the fast or daytime meals for  children and the ill, who do not fast.

But in another more emotionally resonant way, they got all wrong.  It did impact my trip.  It made it infinitely richer. Sure, I knew from teaching world religions for many years, about the rules of Ramadan, but I knew very little about the culture of it. On the way back, the sun was going down and the first day of fasting was coming to an end.  The energy I could see and sense through the coach window was palpable (though the photos I took are pretty blurry). It still wasn’t dark, but people were hovering near tents and open spaces where long tables had been set up, and a whole pita bread was already sitting on each plate. 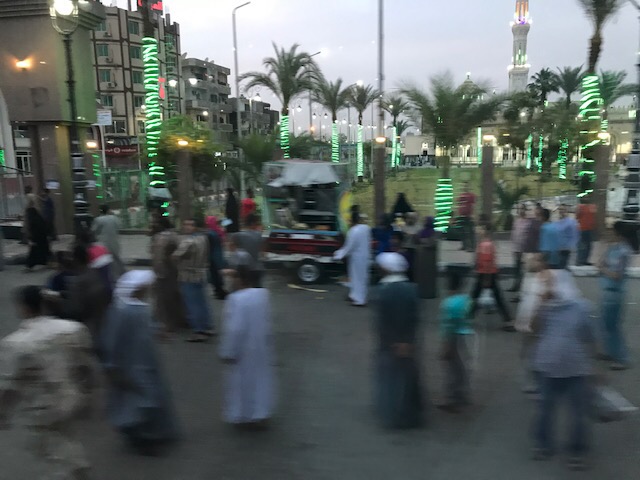 The mosques were lit up with strings of lights, and the joy of the moment was written on all the faces.  Everyone was waving to us as we passed.  One guide said half0jokingly that we had better not stop because if anyone got on board we would all be invited to break the fast with them, and we wouldn’t make it back to the ship before it sailed. A far cry from our fear-ridden society, where the idea  of a Muslim breaking onto a bus would be more likely to instill terror in the heart.

One of our escorts had a box stored overhead on the bus, which he got down and devoured the contents of as soon as it was officially okay.  On the streets, people were handing out styrofoam containers filled with food to anyone who needed one. Someone came along with a big tray full of cups of coffee ready to give out to passersby.

One of the things I think the west has failed to understand about Islam is the cohesion that being Muslim offers in this world.  All around the world, as the sun sets in their time zone, this scene of breaking the fast was being repeated, just as all around the world, like the wave in a stadium, five times a day, as prayer time comes, Muslims take their turn falling to their knees to remember Allah and reaffirm their submission to  his will. Circling the world over and over again in perpetuity—what a powerful bond that must create. It was such a privilege to see a little glimpse.

When I remember that day, I will recall standing among the immense columns of the the Temple at Karnak, and the dazzling colors of the beautiful love story Ramses ordered painted on the tomb of his beloved wife Nefertari. But the most indelible impression will be of smiling people waving at us, piles of styrofoam containers of food,  and flashing colored lights on mosques as the shadows deepened and the day drew to a close. 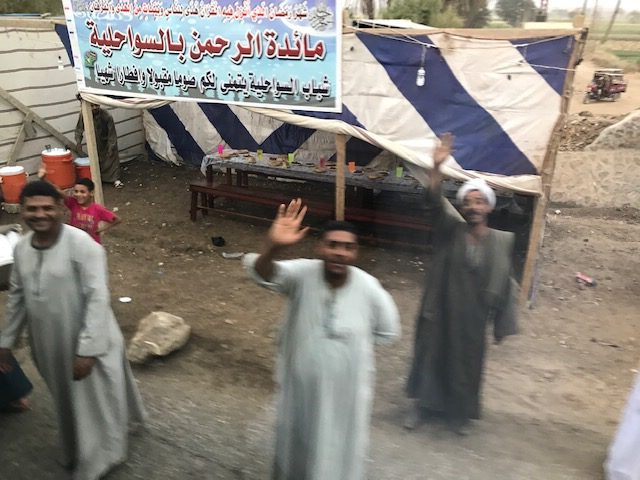 A historical novelist friend of mine once said in a speech at a conference, “while you are writing about the past, don’t forget to live in the present.”  My reaction to this day tells me I am getting better at that.

What I think this  experience, and indeed all my experiences in my travels, was really about is the reaffirmation of the fact that I can admire the past, visit its monuments, wonder at its achievements, and imagine its vitality, but right now is what is real, and today is the only place I live.