And soon a branch, part of a hidden scene,
The leafy mind, that long was tightly furled,
Will turn its private substance into green,
And young shoots spread upon our inner world. 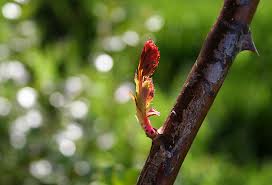 These lines, the end of the poem “A Light Comes Brighter,” by one of my favorite poets, Theodore Roethke, was on my mind as I walked home from the college this week. It’s about the first signs of the end of winter, and indeed they can be found in San Diego already–despite the limited drama of changing seasons around here.

The first time these lines etched themselves into my consciousness was almost thirty years ago, when my home on a canyon rim was scorched by wildfire, leaving the yard looking like a huge ashtray and the trees scorched to a russet brown..  “It’s a miracle how the fire went around this house,” the reporter from the local news chirped from my driveway. My heroic neighbors, who had spent the afternoon on my roof with garden hoses, greeted that comment in muttered disgust: “Yeah, some miracle.”

I thought the trees were dead, but within a month, I saw a hint of something and went out to investigate.  There, in clusters of perfect little emeralds, was life reasserting itself.

When I see the first leaf buds or early blossoms every year, my heart lifts at the sheer doggedness of the will to live that had quietly been doing its work all winter. I often think of Roethke’s poem then, particularly the beautiful last line, where he reminds us of our own internal winters, and the green shoots that come up, often by surprise, to signal that perhaps it is time to put behind whatever has been dreary and cold, and regrow ourselves.

My daily walk to and from the college where I teach takes me past the Rose Garden in Balboa Park, and there is something about the brutality with which rose bushes are cut back in late December that always wounds me. Today the nodes are swelling and the first leaves are breaking out, turning their private substance into green, just as the gardeners with their faith and pruning shears, knew they would.

Last February I lived not just in a different home in a different part of town, but in a different world.  My beloved partner, Jim, was declining noticeably from the cancer that would steal his life in April. When June came, I cried because he was not there to see the jacarandas whose purple blooms he had always appreciated with the glee of a child.  There was only winter for me last summer.  There was even less for him.

But sap does rise and the juices of this beautiful life do surge again.  Somewhere between then and now, the sad, furled leaves of my grief and sorrow opened to reveal something lush and green and full of promise. It’s called life. It’s called understanding that we are still here, and rejoicing in that single, beautiful fact.  It’s what our own internal green shoots are trying to tell us as every season, every stage of life beckons.

A number of months ago, I wrote here that, “I can’t write about writing or the writing life today, because I am not doing any of the former, and as to the latter, I don’t have one.”  I’d have to say that’s still true.  I have been dormant. I haven’t written one word of fiction, or edited anything I had finished before Jim got sick. I’m perfectly okay with that, and have no sense of urgency and no plan to do anything different for now.

In the poem, such a time is called winter, but for me, life is not cold and dreary, it’s simply not the season for the pen. In the last few months it’s been the right time for lecturing on a cruise line, seeing movies, taking up golf, making some new friends, palling around with old ones, and starting to think about loving again.

I don’t speculate about my writing future, although my friends seem certain I have one. Blessings on you for your confidence and support.  Maybe you are right, but unlike the roses in Balboa Park that shared their wisdom with me this week, I am not stuck with being able to produce only one kind of flower.