I can’t write about writing or the writing life today, because I am not doing any of the former, and as to the latter, I don’t have one. 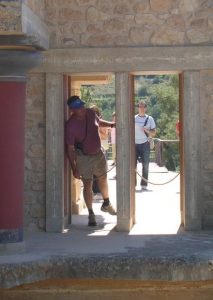 Eight months ago, my beloved partner (and more recently husband) was diagnosed with metastatic prostate cancer.  Though incurable, for most men his age (72), it’s likely to progress slowly enough that they die of something else.  Jim didn’t have that kind.  His was so invasive it left the doctors astonished, and took his life in less than eight months.

When he was diagnosed I was just finishing the first draft of a new book, and as the prognosis began to look grimmer, I set it aside and did not look at the file again. I couldn’t justify spending any time in a made-up world when I had my beautiful, gentle, loving, and utterly precious love still with me.

I still haven’t opened that file, and have no desire to do so. Nothing seems quite real to me now except the actual world in the present tense, and it requires such tremendous effort that there is nothing left over to call upon.  And, surprisingly, I am fine without writing–so fine it is difficult to imagine feeling driven in the same way again.

People say not to make important decisions in the throes of catastrophic events, so I will just say I don’t know what direction my writing life will go.  All I know is that when I make a list of the things that are important to getting myself back on my feet and launched into the next chapter of my life, writing novels is not on the list.  Perhaps that is the exact wrong thing to say on a website devoted to writers and writing, in the company of writing women whom I admire professionally and love as friends, but one thing life has shown me is that under stress, honesty is the only thing I have energy for.

So we will see.

“What was the outcome?” we often ask, as if there is some sort of linear end to matters, a convenient wrap-up that restores our faith that life is a predictable narrative, even if that predictability can only be seen after the fact.

The outcome of the last eight months, since that awful September day when we heard the dreaded “C” word, is that Jim died.  But the thing about outcomes is that they really aren’t.  They are thresholds.  Maybe that’s what we should say instead.

I don’t know what the outcome of Jim’s death is.  I know how I feel right now–or maybe I really don’t.  Our culture doesn’t give us much opportunity or practice in speaking of the nuances of feeling.  I am a writer, and my own vocabulary for such things is pathetic.  I am sad.  I am grief stricken. I am at loose ends….

Pathetic.  Told you so.

I am standing in a doorway.  Thinking about the past makes me sad.  The future without Jim makes me sad too. The only thing I can do anything about is the present, and exigencies are dictating most of that to me as well.

There are no outcomes, only thresholds.  As Goethe put it, “nothing is worth more than this day.”  How much will yours be worth?