Dante would have had to invent a new level of Hell if he had used a computer.  There is truly nothing worse for a writer than a computer malfunction.  I’ve had many of them in the past, most of which haven’t been the computer’s fault at all.

I’ve learned to back up everything multiple places, but even that hasn’t always 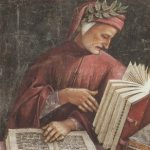 saved me from working on one copy  one day and another copy the next and having different changes in different texts. Very, very hard to get it all back straight again.

I’ve learned to save something as long as a novel in chunks of about 100 pages.  My novel in progress is in Part 3, and I won’t consolidate the whole thing until it is entirely finished, after Part 4.  This is a good move, since I really don’t have to worry about screwing up more than the current section, although it does make going back through the text more complicated.

Over the years I’ve developed so many techniques for saving myself from myself that it was not as familiar a sensation as it might have been when this morning I managed to lose hours of work over what really was a computer malfunction, assisted, of course by carelessness on my part.

I love my new Mac for the most part, but there are times when you ask too much of it and it sits frozen in a holding pattern for what seems like an eternity.  Often the only way to get back to work is to shut off the power and reboot.  This morning that happened, and, assuming it would have automatically saved what I had just written, I blithely powered it off. When I went back, to my surprise, the manuscript contained nothing of my new work.  Nowhere on my computer was it backed up and I had nada, nothing, niente, to show for my effort.

If you follow my blog, you’ll know that I have taken about six weeks off from writing my new novel, and I have been finding it hard to make my way back into it. This morning was my first serious attempt to write, and it was flowing again like crazy.

And then it was gone.  Instead of trying to return to where I was in my imagination, I first tried to rewrite what I remembered already having put down.  It clunked on the page this time around.  Lifeless.  Not good at all.

So I dug in again, going back into my imagination to re-envision everything, and I honestly think what I wrote is better this time.  In my first draft I didn’t see nearly as many possibilities for how this scene could both tie in the past and help move the story into the next phase.  I can’t say I love glitches, but maybe sometimes its best to see them as unappreciated friends. Just as long as they don’t act up too often!