You know the expression about never forgetting how to ride a bike?  Well, I tested it out today on Palau Ubin, an offshore island in Singapore.  I was looking for something to do after I checked in at the airport for my early flight to the Maldives tomorrow, and saw this island mentioned on a number of online “top attractions” lists.  Since it is accessed by the Changi Village Ferry Terminal and the airport is also in the suburb of Changi, I figured it sounded perfect.

I got to chatting with the hotel concierge, and he said  it was a good choice, since the island looks pretty much like Singapore looked before the colonial days.  He told me the best way to get around Palau Ubin is by bicycle. I responded without hesitation, “I think  I’ll just walk around a bit.” Then, as I was in the cab, I had a conversation with myself that went something like this:

Brave Laurel:  You know, you were planning on doing some bicycling this summer in the Baltic, since you have been to the ports many times before and that would be something different to do.

Chicken Laurel: Well, yes, but I was going to practice when I got home…

Brave Laurel: But this island is flat and it would be the perfect spot just to see how it goes.

Chicken Laurel: But I haven’t ridden a bike for over fifty years!

Brave Laurel: That will still be true in San Diego or the Baltic. If you won’t do it today, what makes you think you will do it then?

Chicken Laurel: Oh, okay, I’ll check out the bikes and if they look pretty basic, I’ll …well, I’ll think about it.

Fast forward. I have now ridden over to the island  on a “bumboat” (private boats that offer ferry service). This photo of the taxi service will give you an idea of the infrastructure of the place. Not a car or even a tuktuk in sight, and I wonder whether taking a taxi means you just jump onto the handlebars. 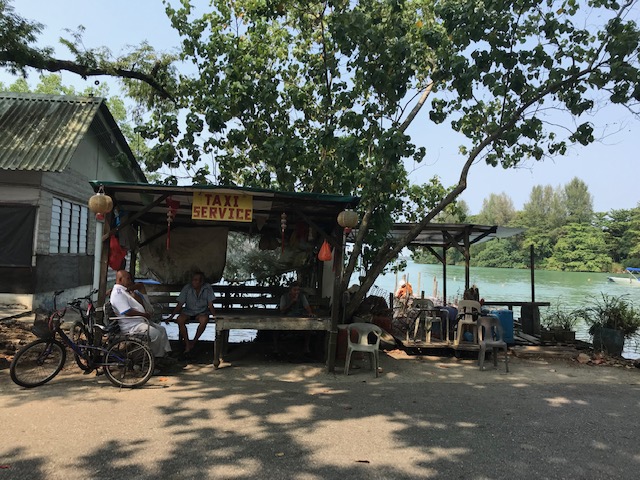 Then to my existential dread, I passed by a bike rental place.  The proprietors called out to me to rent one of their bikes.

Chicken Laurel: “Well….maybe.  I’ll have to think about it.”

The proprietor pointed to a bike, and I agreed to go up the road a few yards to see if I could avoid maiming myself or someone else.  I actually did it without crashing, but it was pretty terrifying because the bike seemed so bulky.  The owner found another, scaled-down version, and I tried that out.  Lo and behold,  I managed a little better.

Brave Chicken Laurel set out on the bike and discovered several things.  First I was okay if I was not going too fast or anything other than in a straight line.  Second, that is not always possible, and I did a lot of stopping to make minor adjustments in my trajectory if I had to turn or found myself headed for a ditch. I also have no thigh strength for anything more than a slight incline.  But all that is minor compared to the thrill that Brave Laurel had won.

The  ride was beautiful, as this one image will show. 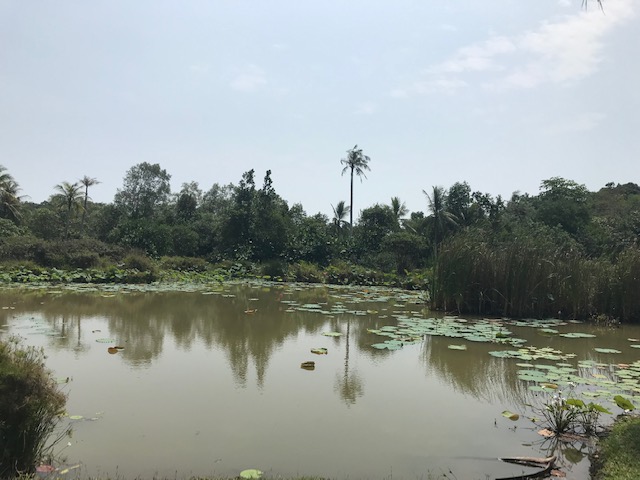 Forty  minutes later I brought the bike back. If you picture me whizzing down the road with my hair blowing back and my girlhood bike skills miraculously resurrected, forget it.    My fingers were twisted with cramps from having gripped the handlebars so tightly the whole time, and I felt halfway to a heart attack with anxiety, but I did it—

I did it!  I even managed a sweeping turn back to the shop by the end, although it almost landed me in the grass.  I beamed all the way back on the boat.

And yes, riding a bike after fifty years is just like—well, like riding a bike. You don’t forget the basics, but the rest is a different matter.  Chicken Laurel is not salivating to do it again, but the primary question of whether I am capable of it has been answered in the affirmative.

Here I am with my bike, below.  Too bad the photo the bike shop owner took makes it look as if I have gained fifty pounds, or maybe it’s just that the photo got a little stretched out in the post,   but I am so stoked about this accomplishment that I will share it anyway.

I think the conversation Brave and Chicken Laurel were having was really about something else altogether.  It was about pushing past boundaries and fulfilling promises to myself about not being so risk-averse that I miss out on the best things about being alive.  I rediscovered snorkeling in the Philippines and bike riding in Singapore.  I am rooting for Brave Laurel to keep Chicken Laurel on the straight and narrow, but in bike riding, sooner or later, I’ll have to learn how to turn. 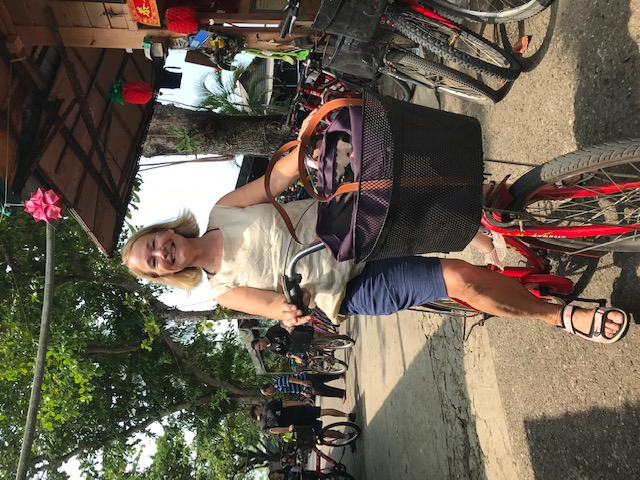