I’ve recently taking up running again after a twenty-five year break. I can’t remember exactly why I stopped–something having to do with small children, a full-time job, and a nasty bout of viral pneumonia that sidelined me for months.

I suppose the biggest psychological factor was that I never really enjoyed running all that much. It was more about wanting to be on the other side of it, to spend the rest of my day having done it, rather than actually wanting to go out and have the experience. I ran so slowly I called it “going out for a trudge” because I didn’t think that even the rather laconic term “jogging” applied to what I did. Running itself was always about no more than getting to the end.

It’s been interesting to see how different it is now. Twenty-five years is enough time to watch a lot of things happen to one’s body, plenty of time to realize that there are nothing but bad reasons at my age to wait one more day, week, or month to get started on something good for me. And so I did. I got out a pair of trail shoes I’d bought a few 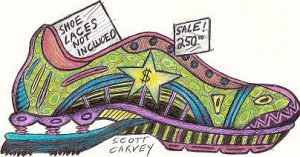 years ago because they looked cute with jeans, and went down to my local YMCA for a course entitled “Running 101.”

My partner wondered aloud why anyone would need a class to learn to run. but having been a sturdy, athletic boy growing up in rural America, he figured it out for himself, like most kids do. I was an overweight pre-teen in the 1950s and no one cared if I could complete a fifty-yard dash, or do ten sit-ups, for that matter. After all, someone has to come in last. And yes, those are both things I remember not being able to do, although admittedly I didn’t get the point of bothering to try. Is PE over yet? That was the only question I had.

With my cute shoes on, I and my classmates headed out for a twenty-minute run on the first day of class. I was left in the dust by a group of people most of whom are about half my age, and by the time the twenty-minute run/walk was over, I was the last to finish of those who ran (some started out walking). The operative word, however, is “finish,” not “last.” Four weeks later, I’m just behind the fast group and running more than 5K in every class.
I don’t know what to attribute being better at it now than then. Maybe it’s that this time I feel more investment in taking control of the quality of my life rather than putting it off until later. I don’t really have a goal other than living in the best body I can. Ironically, the one goal it never would have occurred to me to set–to enjoy the sport–might actually be realized too.

One thing my previous experience with running taught me (other than the fact that I could indeed do it, if not happily or well) was to make analogies from running to the other tasks I face. The 10K (6.2 miles) organized run was just gathering steam in the 1980s, and I ran quite a few of those. Even today, more than two decades after my last one, I still find myself thinking, “this is like the mile 2 mark,” or 4, or 6. Each marker went with a state of mind and body that correlates to getting any kind of big project done.

Like writing a novel. I often ask myself, “so where am I in this process?” and think I am at 3K or 5K, or blissfully, at 6.15, with only the last few steps to go. But I’ve noticed this time around there’s another analogy as well between writing and running.

Every run has its own pattern. For me the first few minutes are the hardest. Every time I wonder whether I have it in me that day. By ten minutes, I’m feeling tired, and I’m still wondering the same thing. Then everything starts to click, and I can go for quite a while at a pretty good clip without feeling as if I need to stop. Now and again, I reach a point where I think “this is hard,” but most of the time I can power through it. If not, I stop, but usually not for more than a few seconds. Take that pattern, stretch it out over a year or more and–well, what do you know?–sounds just like writing a novel.

I’ve been in the huffing and puffing stage for a while with my novel-in-progress. I just could not hit stride and I’ve been dallying by the wayside trying to regroup. Now, however, I have my second wind and I’m off again. I’ll finish later in the fall than I had first thought, but the road ahead looks clear.

If this were a 10K, where would I be? Probably about mile 4, with 2.2 to go. A time to be both discouraged at how much lies ahead, and excited that I really am, once again, on the route and making it to the finish.