A few years back, when i was preparing for a cruise from Vancouver to Los Angeles, I decided that for the journey up the Columbia River to Portland I would prepare a talk on the Lewis and Clark expedition, which left from Missouri in 1804 to explore the continent all the way to the west coast.  Their final stretch for the 33 members of the expedition was down the Columbia River, where almost a year and a half after setting out, they  finally saw the Pacific Ocean.

I vaguely remembered studying this expedition, formally titled the Corps of Discovery, mostly because it starred one of the very few women who showed up in schoolbooks, a Shoshone woman named Sacajawea (shown in a sculpture here) who served as a guide and interpreter, carrying on her back her infant son throughout the journey.  Of Meriwether Lewis and William Clark I remembered nothing except their names. 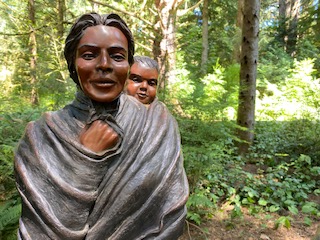 I learned in my research that at the mouth of the Columbia River there is a replica of Fort Clatsop, the structure the Corps built to survive the winter before heading back the following spring. I put it on the list of places I hoped I could visit some day, and when I planned my route to British Columbia, I chose  a route through coastal Oregon that would allow me to visit.

President Thomas Jefferson, who sponsored the Corps of Discovery, required that every man on the mission (mostly army volunteers) keep a journal if he was literate.  As a result, we have a rich trove of documentation of everything about the expedition. We have not only the two leaders’ copious notes, drawings and descriptions, but details of camp life from the others.   We know from Lewis’ journals that he suffered from dark periods that strongly suggest bipolar disorder, borne out by his suicide years later (although conspiracy theories abound).  I have no way to even imagine  what that would have been like for him—and Clark and the others— to deal with out in the vast, unfathomable unknown they were traveling. The journals all suggest very little.  He was, after all, the appointed leader of the expedition, and who would speak ill of him?

I also learned that William Clark had once been Meriwether Lewis’ superior officer. When Lewis was appointed to lead the Corps,  he requested that Clark be co-appointed.  Jefferson refused that request, so though technically Lewis was his superior, he insisted that Clark be called Captain as well, and it isn’t clear the others in the Corps even knew it actually wasn’t true.

Hard as it is to believe, in the three years of the Lewis and Clark Expedition, not a single life was lost.  Not one, despite all those mountains, rivers, brutal weather, natural disasters, predators, and other obstacles.  Well, that’s not exactly true.  A week or two after they set out, one member of the Corps developed peritonitis and died of sepsis.  That would have happened if he stayed home, most likely, and it should not taint the astonishing leadership and judgment of Lewis and Clark.

As to the reason I needed to go to Fort Clatsop, one of the things that reflects best on America happened upon their arrival at the Pacific in November 1805.  They knew they had to winter there in that milder climate because their route home across the mountains and plains would not be passable until spring.  There were two  possibilities.  First, they could stay on the coast and hope to flag down a passing ship, for trade had opened up along the coastal route by then.  Second, they could go a short distance inland, where the forest would offer better protection, but they would miss the chance to be picked up.

Lewis and  Clark did what I think is a quintessentially American thing. They could have just decided themselves which to do, but they didn’t. They presented it to the group for a vote. Everyone got an equal vote, including Sacajawea and York, an enslaved man Clark had brought along as his servant.  They were the first African American, the first woman, and the first indigenous person to vote in American history.  The group voted to go inland, and that was that.  Fort Clatsop (replica shown here)  was the result. 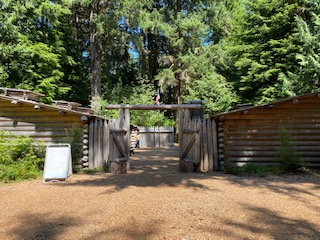 That’s pretty impressive, but I don’t want to sugar coat these two men.  They were products of their time, and deciding that everyone deserved a say in that situation is not the same as thinking everyone is inherently equal.  After their return to Missouri, York fully expected to be freed, and was astonished that Clark refused.  I am astonished as well.  Clark also persuaded Sacajawea to let him take over the schooling of her child back in Missouri, so he could grow up in white culture.  Also cringeworthy, so let’s not leap to declare him a saint.  But let’s not throw him out as a racist SOB either, for he was so much more complex than that.

The story of the vote on the shore of the Pacific reveals the simple truth that sometimes the best leaders  are those who know when to follow. Leadership means more than issuing orders. True leaders enable.  True leaders listen. True leaders know when to get out of the way. That is what the American founders thought leadership would entail in this new experiment in democracy. The country was still so new when Lewis and Clark set out that the greatest intellect behind the Declaration of Independence and the Constitution, was not only still alive, but the one who sent them.

Up here in the northwest corner of the United States as I write this,  I offer up to the universe the hope that the best that was in Lewis and Clark can prevail in a better America,  where everyone matters, and where York and Sacajawea are treated as equals not just sometimes but—unquestionably—always.