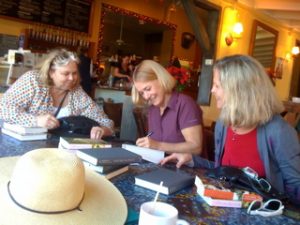 recently posted on Facebook to tell friends that she was finishing up her review of the proofs for her new novel, To Be Queen, out in April 2011. “These proofs will never end,” she says. Of course, I don’t want them to, I guess. I love seeing my books in print, but I love that time when it is just me and my characters. Am I nuts or what?”

In a follow-up post Christy added, “I’ve definitely got the crazy portion of the program covered.” This made me laugh, although I realize now I probably misunderstood her meaning. She was answering her rhetorical question about whether she was nuts, but I took it another way, that correcting proofs is the crazy-making thing she was now getting covered.

It’s all crazy making, really, every last bit of imagining, planning, writing, revising, editing, and reediting that goes into a historical novel. I’ll use myself as a case in point. In the last few months I have been most negligent about posting to this diary, but here’s my excuse:

THE FOUR SEASONS: Not much work anymore on my first novel, out since fall 2008, except to wrap up a couple of commitments made earlier. A book club won a silent auction item that was an autographed copy and a personal visit to their book club, and it just hadn’t gotten scheduled until this fall. Very strange to go back and revisit a book I hadn’t given much thought to for quite a while.

PENELOPE’S DAUGHTER: Published about 10 weeks ago. Huge amounts of effort are part of the picture for authors in my category, who don’t get big publicity budgets from their publishers. I guest blogged more places than I can remember, and made more than a dozen appearances here and there in less than two months.

FINDING EMILIE: Huge amounts of work for my next novel, coming out in April, right around the same time as Christy’s, so our lives are running parallel right now. Some glitches in the process of copyediting the manuscript created a disaster in which huge numbers of errors were introduced into the book at that late date. It took herculean effort by the editor and me to get it back on track, and even the proof pages had way more problems that normal. Presumably it is all fixed, but I will receive another set of proofs to check, so I’ll have crazy time again soon. I have a short break at that point before I will need to start the blitz of effort required to have a strong launch at publication time.

THE SHAPE OF THE WORLD: This is the working title of my latest novel. I started work on it last December and I have just finished it. When I am writing a novel I have essentially a second 40-hour-a-week job, and in the summer, the novel is a job and a half on its own. I’ve already written here about how I monitored my time to keep “the crazies” at bay this time, but a novel is such intense work, it is difficult to let it go, and then difficult to recover emotionally (and even physically) when you finally say, “I’m done.”

I’m done. The photo here is of my last appearance, a great time with a friend’s writing group. Now there will be a hiatus on everything. I have a few things lined up early next year, but my calendar is pretty clear. There will be nothing to do on THE SHAPE OF THE WORLD except incorporate a few revisions from early readers with specific expertise in various aspects of the book. It won’t even be marketed until later this spring, so the book can sit tight without needing care and feeding. Eventually, around March, I will start preparing guest blogs and lining up appearances for FINDING EMILIE, but there’s nothing to do now. PENELOPE’S DAUGHTER and THE FOUR SEASONS have left home and are managing on their own.

And, for the first time, I don’t have a clue about who or what I will write my next novel about. I’ve researched at least a dozen ideas and have decided that none of them are the one that’s going to pick me up by the scruff of the neck and sit me down at the computer. It’s a good thing, for I have never not been writing for about seven years now, and I have five books to show for it. A break is a good (although weird) thing for me.

No, you’re not nuts, Christy. You are just blessed with the passion for writing. Me too. Lucky thing, because the crazy portion is part of the bargain.