It seems as if most of the time I arrive a day too late or leave a day too early to see a city make a big splash, but in Vancouver I was just right, and I didn’t even know it until the excitement was  on my  doorstep—literally.

Many months ago, Dan and I made reservations to come to Vancouver a couple of days before starting a cruise, to give us a chance to look around a little more.  Since arriving it has been one surprise after another.  First, the hotel we booked, The Sylvia,  turns out to be a historic beauty right on the waterfront of English Bay. Second it has been sunny and warm, the water sparkling, and the locals  out in droves on bikes and on foot, enjoying the utter happiness of this beautiful place they call home. With Dan’s broken toe we haven’t been able walk very far to dinnner, and voila, the hotel restaurant turned out to be first rate.

”There are fireworks tomorrow tonight, “ our cab driver said. “You’ll be able to see them from your hotel.”  That was the first big understatement of our trip.  The fireworks were a lollapalooza, part of an International Fireworks Festival, spanning several weeks, in which countries compete for who can impress Vancouver the most with a  25-minute display choreographed to music. The festival has been going on nearly three decades, and I had to shake my head in wonderment that a city could get other countries to come and entertain it like this, for no  reward that I could discern except the bragging rights of winning.  I wonder what would happen if I tried to persuade top chefs to come compete at my place, and then I would clap one of them on the back and say, “Congratulations!  Your truffle-infused duck fat potato confit with persillade and pea sprout garnish wins the prize!  Thanks for coming!  Bye!””

It didn’t take us long to determine that another surprise was in store this weekend, when we started seeing all the costumes and an extraordinary spirit of fun and frivolity everywhere.  Not only was there a comic convention going on downtown, but it was a Pride Weekend and there would be a huge parade passing  by —you guessed it—one block from our hotel.  Drums,  rainbow floats, lots of random marchers and proud onlookers.  Thanks, Universe —I needed a reminder that even though so much seems dark and threatening now at home,  there  has been great progress in my lifetime on this and other social fronts I care about.

I  am feeling like royalty!  I mean, how many visitors get fireworks and a parade?  And then, to top it off, I discovered wines from the Okanagan Valley, British Columbia.  I had been there once with my late husband, who grew up on the shores of Lake Okenagan, and while there we tried the wine and weren’t very impressed. With my penchant for trying local when I travel, I decided to give it another chance, and yum!  I was, of course, inspired by that to give local peach wheat beer a try at lunch in Stanley Park yesterday. Yum too!    So of course I had to confirm my experiment by trying Okanagan wine again today at lunch.  Even better than the first one!  The photo below is included to show what great lengths I will go to to boost the British Columbia economy by drinking their best!  Cheers! 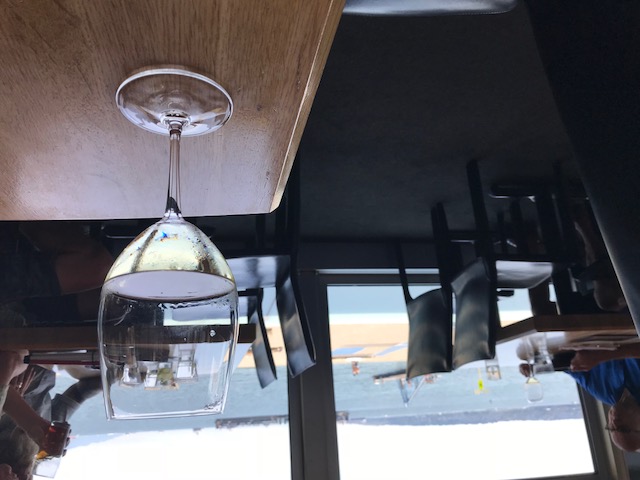