I am now in Singapore after a week in Indonesia. Before I left Yogyakarta, I  got to thinking, over my last breakfast, about how my comfort zone is changing, and how much that can be illustrated by food.

I would not characterize myself as a foodie.  I’m neither fussy nor particularly adventurous. I don’t yearn for any particular food (well, except  frozen yogurt and popcorn), and I am usually happy to have other people choose the restaurant when we go out. I have been so overindulged  in my  recent life that not much on cruise menus really excites me any more.

Add to that the fact that the digestive system gets a little cranky when we travel, (and, unfortunately as we age), so I am always a bit worried that  unfamiliar food may get in the way of my best laid plans and force me to spend the day  in the bathroom rather than on a tour.

So one of the anxieties I carried with me as I went off on the Asian part of My Year of Living Travelly was the challenge of eating when I was off the ship traveling on my own.

I will use the buffet breakfast at my hotel in Yogyakarta as an example.  It was huge, and gave me a chance to see in one place the great diversity of Indonesian cuisine.  I am not a big breakfast eater to begin with, and the first morning my stomach churned at the idea of eating any of it. 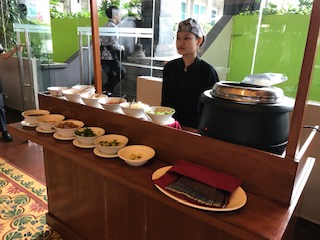 On one table, there was a set-up with a mystery stew, at another a chicken porridge (photo above)  with copious condiments, which seemed very popular. At another, an array of dishes that might work for lunch—sweet and sour fish, chicken curry, fried rice and noodles,  and the like.  The condiments were equally mysterious,including  a variety of sambals ( salsas of various fire powers).

Gamely, I tried a little of a few things, and concluded that Indonesian breakfast was not my thing.  The next day I discovered the fruit bar and chowed down on brilliantly colored watermelon and other tropical fruits and ignored the rest.

However, the time I spent with my guides included meals at places  known only to locals, and a few open markets, where they encouraged me to try this and that, and little by little, I got more adventurous. Indonesia was so open to me, and I would be more open to it.

My third and final breakfast was an entirely different experience.  I still passed on chicken porridge (sorry, but to this westerner, chicken doesn’t go in cream of rice, ever), but  I looked around and said, “oh wow, that fish looks good,” and even “I bet that fried chicken is tasty,” (photo below) and  “I wonder what’s inside that banana leaf packet,” and proceeded to pig out on a good half of  what was there, along with tastes of every condiment I saw.

The  first morning, if there had been American comfort food like mac and cheese in the buffet, I would have gratefully  eaten it.  By the third morning I would be asking, “what the heck is that doing there?” while I reached for the nasi goreng, the sambals, and my new favorite, Indonesian salad (shown here) 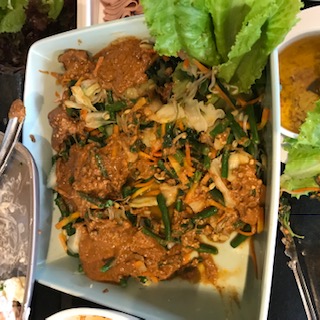 I can do this.  More than that, I am doing it.  My comfort zone is expanding, welcoming me to more and more of the world.  Now to keep my waistline from expanding along with it!