a waterfall descending over a steep, rocky surface.

anything that resembles a waterfall, especially in seeming to flow or fall in abundance.

Maybe it’s the sound of moving water, whether lapping over sand on a calm bay, or thundering over a cliff top, or moving slowly and languidly across a shallow bed of chattering pebbles. Maybe it’s the way it changes with circumstances, transparent and glassy one moment, and churning opaque white the next.  Whatever it is about water, its wisdom finally found me. The last three days, beginning with a beach in Victoria, then moving through a series of lakes, rivers, and waterfalls, brought me to a moment in my life I had assumed I would never reach.

Wherever I go, the memory of the two people who have most deeply betrayed me has come with me.  They have intruded on my happiness for years, and I haven’t been able to address it in a way that allows me to put it in the past and move on.  I am better than I used to be about actively banishing trains of thought that get clogged up with my resentment and rage, but never have moved to the point where these two people don’t matter anymore. The cascading thoughts of the last few days make think that moment has finally come

It all began with the High Holy Days ritual of Taschlich, the symbolic casting away of shortcomings and failures of the past year by throwing bread onto water, in this case at a beach in Victoria, delayed until now because of the smoke of last month. I came up with quite a list of ways I could do better in the future, but I balked at even the thought that this year could lead to relief from the burdens I place on myself by my inability to forgive.

I drove off from there for a three-day adventure on Vancouver Island, centered on the area around Strathcona Park and the Campbell River.  My plan was to choose short, easy hikes to waterfalls, and I picked out four. Over the next two days I saw them all, and the rivers that produced them and the lakes from which they came, or to which they flowed. One, Lupin Falls, is shown here 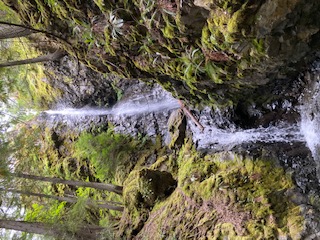 I went through old growth forests, through golden pathways of falling leaves, through phalanxes of towering cedars, hemlocks, and firs, across massive fans of roots and rocky rubble.  With each experience I felt a lifting of burdens of all sorts, to the point of true joy at being where I was—and only there, nowhere else in my head or otherwise.

I am not sure when it first hit me, or even if it hit me at all or just evolved, but my thoughts were eventually able, for the first time, to drift to these two people without judgment. They are who they are. They have terrible, deep psychic wounds that cannot be healed and these played out in hurtful behavior toward me. One of them, Michael Bart, my partner in Until Our Last Breath, has defamed and belittled me for years as having made inconsequential, secondary  contributions to a book I wrote in its entirety. Anyone who has poured his or her soul into a creative work will understand the pain of having such a huge accomplishment appropriated so callously, as if his ideas and editing  gave him greater standing than the person who actually crafted all the words.

Perhaps there is some debt or shortcoming he feels as the son of Holocaust survivors ( the subject of our book), that made him need to create the lasting legacy of a book. I can step outside my anger now and say that I am glad he has that legacy. I am glad he has a book that gives him standing to go out to speak to audiences because it is important both to him and to me that his voice be heard, and that voices now long silenced be remembered. I wouldn’t have taken on the project if I didn’t think this.  As to his need to shove me aside? Apparently, authoring a book is what he needs be true, even if it isn’t.  Say whatever he will,  the truth is I wrote the book. Every word.  Period. I have finally put to rest the harm he did to me.  It is now entirely his burden and not mine to carry.

I still don’t know what psychic wounds sent my first husband into the tailspin that destroyed our marriage and his career, and I’ve already alluded to him enough in previous posts that there is no need to say anything more here. I am sorry for whatever it was—some lack in his experiences as a child or some awful tweak in brain chemistry, or something else entirely— that made him unable to hang on to the success he had made of his life in the early years of our relationship. I loved and admired him for so long. I don’t know why that was never enough to pierce the self loathing, and I understand now that nothing and no one ever could have.  I am sorry he flew too close to the sun with waxen wings. I am sorry that his fall made him unable for decades now to receive the admiration and accolades a successful career and a long and happy marriage might have brought him.  Still, it is clear to me there is nothing that could ever fill that sad and yawning hole at the center of him.

Today I sat at Nymph Falls, more rapids than falls,  at the edge of Strathcona Park, pictured here. 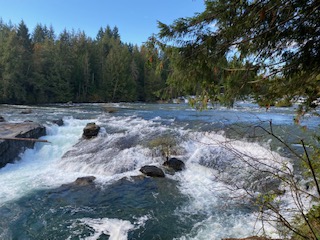 I watched  water slide effortlessly across smooth rocks and pool in shallows, only to be pulled out again and sent hurtling down to slam against boulders, and roil and bubble in an opaque battle against itself until it is released into the calm again. Life is kind of like that, I thought. And then, suddenly, a salmon leapt out of the water, making its way upstream.  Yeah, I thought, life is kind of like that too.

But maybe that’s what this turning point will mean for me. Maybe I can finally  stop swimming upstream about this part of my life, stop letting all this negativity pound down on me.  I don’t need to forgive or not forgive them. That’s what I didn’t understand until now. It’s more just an acknowledgment that they behaved consistently with who they are..   Let them be caught in whatever cascades their behavior unleashes.  It has nothing to do with me.  I have a beautiful life to nurture.  I think I can do a better job of that now. 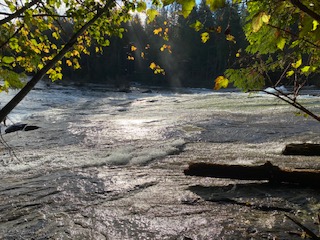