I posted a while back about how I was trying to get more adventurous in port, and I took another step today in Phuket, Thailand.  There was no shuttle into town due to a strong taxi union, and everyone had to bargain with the swarms of taxis drivers hanging out at the port gate.  When I heard it wasn’t going to be a simple as shuttle in, shuttle back, and it would be expensive to boot because the drivers expected to be your escort for 4-5 hours minimum as you made your way around town, I had this moment of old Laurel, asking why bother going in at all if it would be a hassle, but the me I am trying to become won out, and I got a driver  for $70 and gave him the list of places I wanted to go.  Took a photo of him and car license just in case, but he was perfect and always found me. 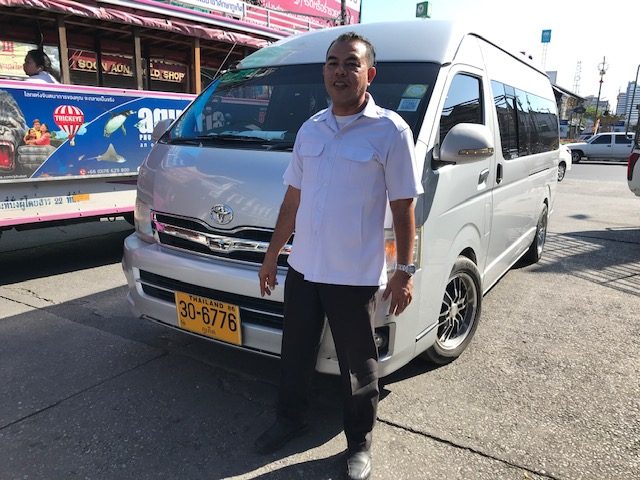 I also swore to myself I would eat lunch in town instead of chickening out due to tender tummy issues, and indeed I did!  Here is a photo of my crab curry with some sort of  leaves and rice noodles.  It was wonderful. 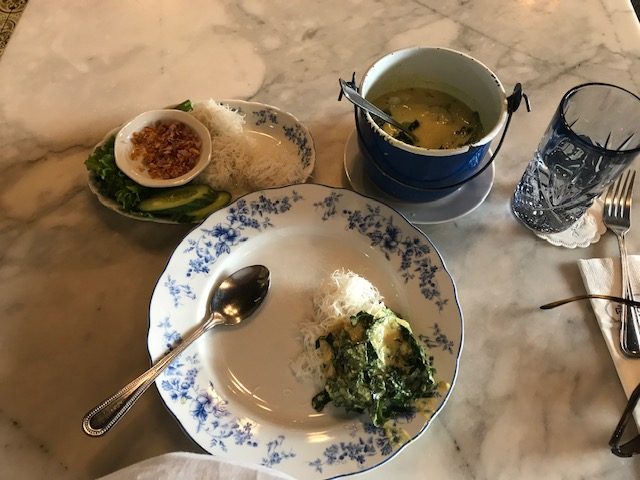 I learned something interesting about Thai table manners too.  The restaurant was packed with Thais and I noticed they all were using their fork to place food on a big spoon, which they then used to eat.  Very different, but when in Rome, or Thailand, do what everyone else is doing, and I have to say it worked just as well as any other way.

I had a clueless moment, however, when I forgot to ask in advance if they took credit cards (it was a very nice restaurant, so I just assumed), and they did not, nor would they take dollars.  Uh oh!  I wandered around  looking for an exchange booth, but it being Sunday, couldn’t find one.  I went back to the restaurant only to be told that really credit cards were fine with a 5 % surcharge, which sounded just fine to me, despite a little annoyance at wandering around in sauna-like air to solve a problem I apparently didn’t really have. But note to self:  always take debit card, not just credit card and American cash, if I don’t have local currency.  And second note to self:  don’t assume anything.

But the big deal for me is that I pushed my usual boundaries.  I did what doesn’t come naturally, and what I hope someday will.  I can’t say I love Phuket, but I can say I didn’t let it pass me by.