Funny how a misunderstanding can sometimes lead to an entirely unrelated insight. A few days ago my partner was talking about a paper he was working on in his scientific field, and I heard him say, “it’s an instruction from my imagination.”

“That’s exactly what writing is like for me!’ I replied.

Turns out what he actually said was “it’s a construction from my imagination,” and that’s apt too, but fiction writers already know that our work is constructed out of our heads. It was the misunderstanding that provided real insight into my own creative process. 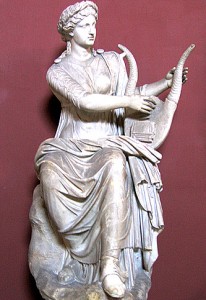 (which I like to think of as a Laurel Corona). She sits on a writer’s shoulder and sings inspirational songs while accompanying herself on the lyre. My muse isn’t like that at all. She’s more like a drill sergeant barking orders. Get up! Get to work! Stay put! You have a novel to write! With all my novels, it was like getting instructions from my imagination, instructions I had no choice but to accept.

I’m not saying I don’t love my Muse. She has never let me down (although, as for all authors, the Muse’s relationship to our unwritten books is yet to be seen). But writing is a real taskmaster, and writing a book feels like going to a very, very long boot camp.

Long indeed. I realized the other day that I have written four full-length books–three novels (THE FOUR SEASONS, PENELOPE’S DAUGHTER, and my in-progress work, THE LAWS OF MOTION) and one narrative non-fiction work (UNTIL OUR LAST BREATH) in six years. I have never not been writing a book since the beginning of 2004, and in some cases, most notably with UNTIL OUR LAST BREATH, rewriting and heavy editing overlapped with creating the first draft of THE FOUR SEASONS.

Those are some pretty serious marching orders! So I’ve been appreciating the fact that, with the first draft of THE LAWS OF MOTION done (and with no editor yet to take the place of the Muse), I have no orders at all. I’m back to having only one full-time job, teaching humanities at San Diego City College, and it is really a treat to be able to give it my full attention. Who knows? I might actually do some reading for pleasure this fall. Play a little more tennis. Get back regularly to the gym. Read more than the headlines in the paper. This could be fun!

But I’m keeping quiet about it. You never know what the Muse might do if she starts feeling insecure about her hold on me. But I don’t worry too much. Whenever she wants to return I will welcome her with open arms–that is, after dropping and doing a few sets of push-ups.