I have been mulling over comments of several friends of mine about a Facebook post I shared of my time at Borobudur.  I had so many wonderful encounters with Indonesian schoolchildren on holiday and shared several photos my guide took of me with them. 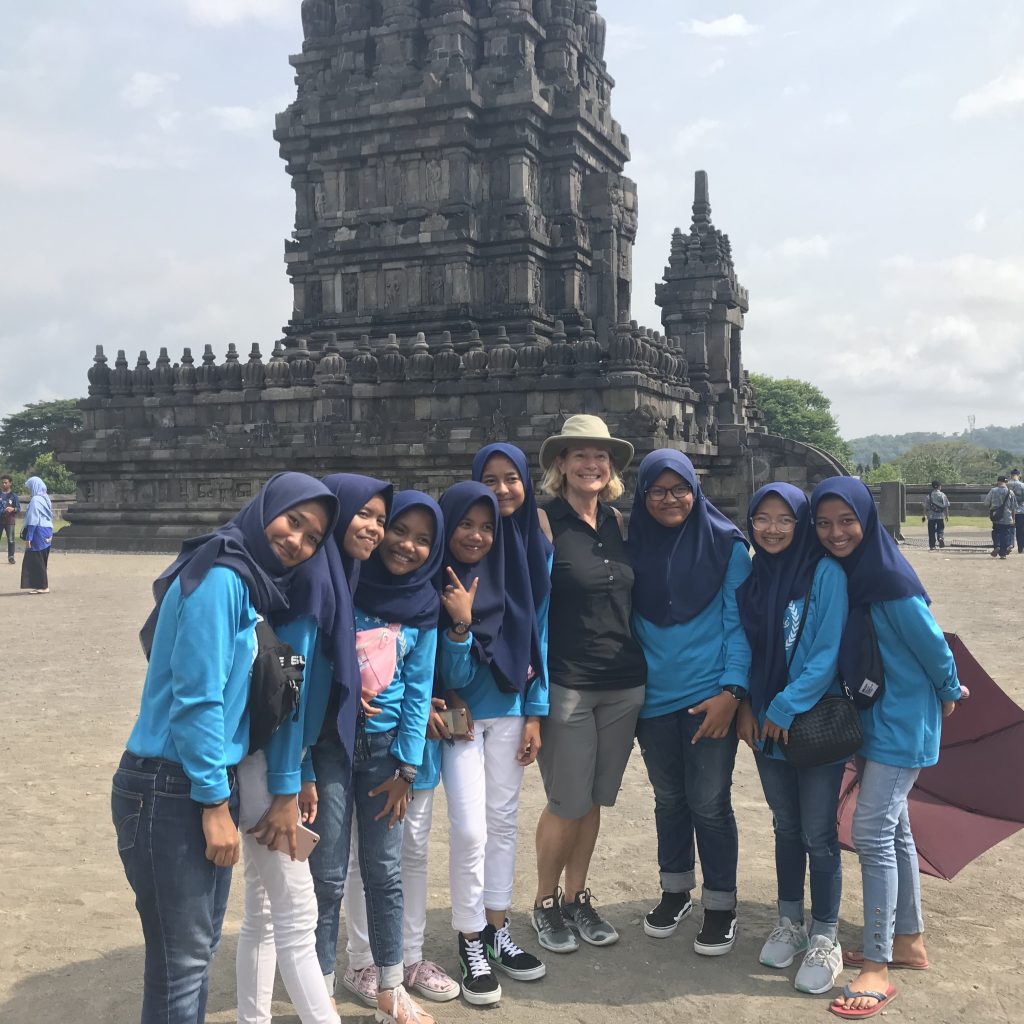 The comments were about what a good ambassador I was for the United States. Of course I was just being myself without a thought to any such mission, although in the horrific current climate of American geopolitics we certainly need to try as hard as we can to counter it.

But I  got to thinking the last few days what powerful ambassadors those schoolchildren were in return.  Their openness, their shining eyes in their clear young  faces, and  the typical adolescent behaviors they showed( the girls all giggles, the boys all jostles) sent such a powerful messages of humanity at its sweetest and most beautiful. 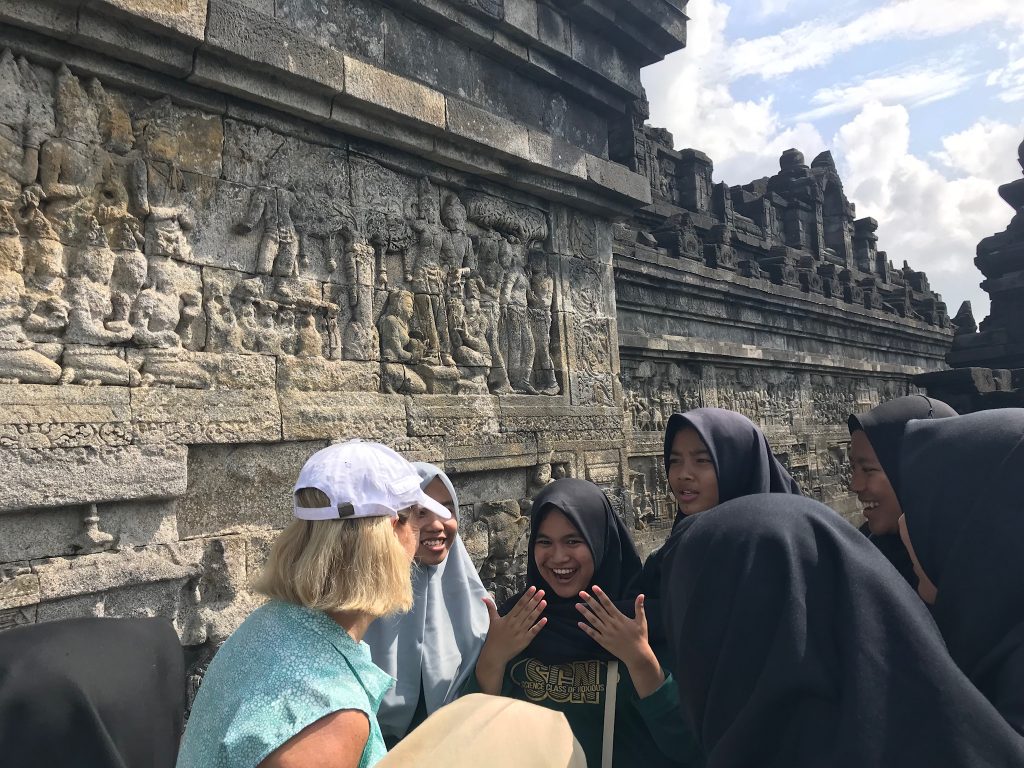 i don’t share the prejudice against Muslims that is so rampant in American culture, and perhaps for those affected severely by that poison, a trip to the most populous Muslim county on earth simply wouldn’t be an option. However, I cannot see how anyone could go to Indonesia and come back with their views unchallenged not just by schoolchildren, but by adults who smile and patiently let strangers take photos of them, or the hundreds of people whose faces light up as they put their palms together as a simple greeting of good will.  And I am not just talking about people paid to be nice.  I am talking about people on side streets, in local restaurants, and in rural villages, who simply want to convey that we can coexist in mutual respect. 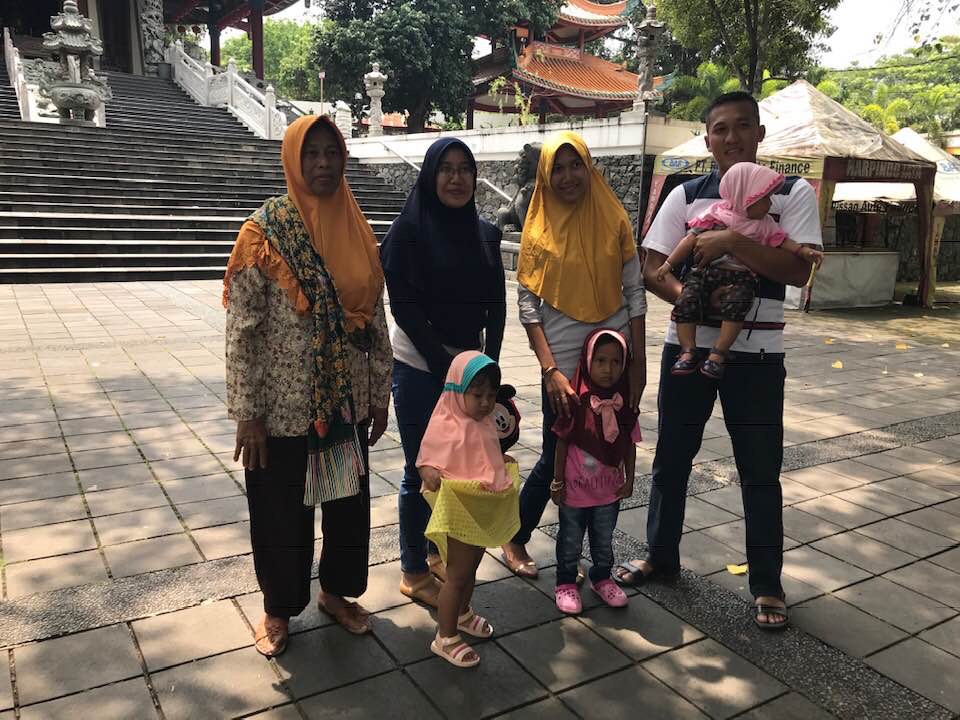 If wanting to signal back the same feelings to them makes me an ambassador, then yes, I am doing my best to be one.

I overhear comments from fellow passengers when we are out and about that reveal a lot about what kind of ambassadors they are prepared to be. One thing you see a lot of in Indonesia is motorbikes, and though typically the rider is alone or with one other person, occasionally you see a whole family, with one child  between dad and the handlebars, and one or two more sandwiched between dad and mom.

On one tour bus, several passengers were scandalized.  How could that father and mother endanger their children in that fashion? Look!  There’s one more—a baby— in the mother’s arms.  See that little foot sticking out?  Outrageous!

Another person commenting about another such scene spoke only of her worry that the family might not be safe, with genuine concern that no one be hurt.

i am more practical than sentimental, I guess, and my reaction was to see a father and mother using the resources they had (one motorbike) to do what needed to be done for their family, and I was admiring how they were getting by with what they had.

The first reaction does not bode well for ambassadorship—willingness to pass judgment, inflexibility about the new and unfamiliar.  You can see litter, or you can see faces.  You can see the struggles of the poor, or judge them by standards they cannot possibly meet.

I think the key to ambassadorship, either direction, is generosity of spirit, the belief that people you interact with, or even just observe from a distance, deserve the effort it takes to imagine their lives, not just the quick snapshot one sees. Effective people—whether they are  ambassadors with portfolio or CEOs, teachers, lawyers, politicians, electricians, plumbers, or people like me who are just trying to get a broader picture of the world—are the ones who search for, or even  better, crave the experience of shared humanity. That’s what ambassadors do.  That is who they are.