A male friend of mine recently posted a challenge to describe oneself without words, using pictures of three fictional characters. One of his choices was Santa Claus, and it made me laugh because it did fit his generosity and cheerful nature.  I struggled to find a way to share my three fictional characters  in return.  Mrs. Claus?  Get real!  Who would leap to identify with her?

Well, I came up with two, actually, but they were both from children’s media. I will get to who they were  in a minute, but I want to dwell on that for a while. What does it say that, with a Ph.D. in English, I can’t find three females in literature who could together, even in jest, create an image of who I am?

Why is it that to come up with anyone, I have to go back to stories of fictional little girls, written for real little girls who are still at an age where being spontaneous, daring, quirky, and individualist are still prized? What adult female literary characters would represent my love of self-reinvention, newness, adventure, and commitment to principles?  I could point to Amelia Earhart, Annie Oakley, pirate Grace O’Mally,  and RBG, but they are real people. and there are precious few of those.

How incredibly has literature failed us when women have to identify with male characters in order to identify with anyone at all.  How much easier it is to find fictional women who imploded under their circumstances, prostituted themselves in one or another of a thousand ways to men, became horrible people in the process of defying stereotypes, or paid for the crime of self-assertion with social ruin, or death at their own hand (or the second, following on the heels of the first).

Hopefully, things have changed. I love seeing girls in t-shirts saying “Forget Princess! I want to be X” with X being rocket scientist, president, or something equally ambitious.  Cheers to whoever bought them the shirts! I assume there are books and television characters whose behavior sends the message of female agency and efficacy, the ability to shape our world, and shape and reshape ourselves in that world because we choose to, not because we are forced by more powerful others into it. I am just blank about who they are.  Write to help me out, if you can!

I challenge anyone reading this, particularly women, to decide who their three images would be.  I’d love to hear if you did better than I did.  And now for my two. I have never watched Dora 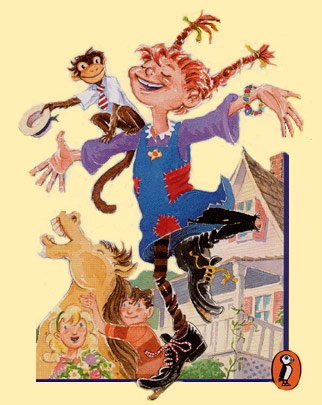 the Explorer, but I have to figure I would like her and identify with her spirit of adventure.  In first place is one of my childhood heroines, Pippi Longstocking. She was the picture of boundless energy and cheer, making up a fun life as she went along, heedless of what other people thought she should do. She did no harm to anyone, and did so much to enhance the lives of her little friends who before she came along were already dutifully falling into line to become boring, unimaginative adults.  I’m not sure I ever wanted to be her, but I certainly did want to know her, to be her friend, to let a little of her rub off on me.

No, my triad will not have Madames Butterfly or Bovary on it,  nor Scarlett O’Hara, nor Jane Eyre.  It won’t have any men on it either, despite having found some Don Quixotes, Garps, Pooh Bears, and others I could feel some identification with.  I guess I will just have to stick with being my own unique self, and create a collage of countless pictures of me just bring me.