I gave a talk at the La Jolla Writer’s Conference this weekend on one of my favorite subjects, “Writing Scared.” In it I talk about how scary writing is even to those of us who do it all the time and are successful at it, at least to the extent that publication is an indicator. 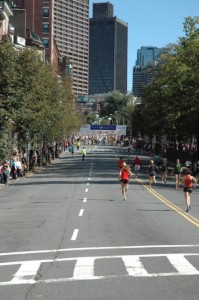 At some point in the talk, I made a point I often made to my community college classes when I still taught research writing. We generally think in terms of things we want to do, but I think sometimes it works better to cast goals as things we want to have done.

“I want to get a college degree,” someone says, when the more accurate statement might be “I want to have gotten a college degree.” Likewise for many things. How many people want to work out, for example? Don’t most want to move on with their day having finished a workout? Don’t we want a clean house more than we want to clean it? To have a weeded garden more than to weed it? My students wanted to have written their first ten-page research paper far more than they actually wanted to write it. I heard thousands of testimonials to that effect over the years!

This seems like a simple enough point, except I suspect that the people who finish things may be those who have the best ability to remember how good satisfaction feels. Let’s face it–when we are working toward a substantial goal we spend the vast majority of our time in what I once named the “middle muddle,” where the tasks seem endless and the finished product far too distant to offer much light. Keeping going is really an act of faith mixed with a huge amount of imagination.

Can you remember how good it feels to stand up, covered with dirt, or sweat (or their equivalents when the task has been one of the mind) and look at what you have accomplished? Doesn’t the down-and-dirty of it just not matter anymore? Life is so good in those moments. and we can have them only if we’ve done the rest without faintheartedness. “I want to have written a diary entry,” I told myself this morning, and now I have!