I am drafting this post as I  fly over the Rockies on my way once again to Montreal for the last of three fall foliage cruises. Each has been a little different, one going up to Noofin Land ( which  I am told by Newfoundlanders is how the word is pronounced), one going down the eastern seaboard to Boston,  and this one continuing further to Fort Lauderdale.  The fall foliage  is fading, winter is coming, and Canada cruising will be over for the year with this voyage.

I started my North America part of My Year of Living Travelly with a few weeks in Alaska, going between Canada and the US and now I am ending it on the other coast doing the same.  When I started, the first leaves were starting to yellow, and now the last will be fluttering to the ground.

In between was the seasonless world of San Diego.  Friends  from Connecticut sent Dan and  me a beautiful foliage photo taken on a walk in their neighborhood, and we responded by sending one of the lone tree in Balboa Park we could find that was losing its leaves, although in more a shrivel of dull rust color  than the loop and swirl of yellows and oranges drifting to the ground

So now here I am, airborne again, heading out on—what is it?—my eleventh cruise in my fifth part of the world with my seventh travel companion (Dan twice) in my eighth month of Living Travelly.  A good a point as any for a little reflection.

It’s nice to be in San Diego for a while.  I have deep roots here—more than half a century living here makes me just about a native.  But it’s different to come back for a couple of weeks than to come back with no expectation of leaving for a while. There’s the rush to fit in seeing friends, but that is balanced by a feeling that there is hardly any point in picking up activities one is going to stop doing again very soon.  I had a number of great lunches with people I love seeing, but I played tennis only once, and I didn’t  swing a gold club at all.  I see announcements for things the social activist in me would want to participate in, but the reality is that I will be back in my other world before the events take place. Ads for upcoming movies, shows, and events remind me that I won’t be here for any of it.

As I leave once again I can say with even greater certainty that  I am dislodged and displaced, but not at all discombobulated or dismayed.  I belong nowhere in particular which means I belong equally wherever I am.

Maybe the seasonlessness of Southern California has a little bit to do with the way I am feeling.  People elsewhere are turning their thoughts to preparing for winter.  There’s rarely a “now or never” feel in San Diego.  Tomorrow will be pretty much the same.  It’s okay to leave.

I will admit that I felt no frisson of excitement heading out to Montreal this time.  This will be my fifth time on the St. Lawrence River and most of my questions have been answered about it, and  desires met.  But that doesn’t mean I didn’t want to go.  It doesn’t mean I am getting tired of the life I have chosen.  It just means I am having a bit of a delayed reaction to what the opportunity represents.

Now that I am actually headed there, I am excited about sleeping in Montreal tonight, excited about walking around the port tomorrow, excited to go back to a couple of great shops I found and a few lovely places to stop, breathe, and look around.  Excited to get back on a ship I haven’t been on in a while, to see who i know on the crew,  and what cabin i will have.  Excited to  unpack all my stuff and start doing the dressing for dinner and the other girly things I love about cruising.  Excited to be sharing the beauty of the  area and the fun of the ship with my friend Annie.  Excited to feel the nip of fall on my cheeks.  Yes,  here I am ready to go again!  Montreal and Silver Wind, here I come!

I saw that what was inside was my furniture, but I couldn’t relate to it at all.  It was like wandering in a dream. Framed  posters of my book covers were on the walls, and throw pillows and other  details I had lovingly chosen were still there, so the place was still marked as mine, I guess you could say. But it didn’t seem to have any connection to me.

I am still trying to make sense of this.  I had zero nostalgia, zero sense of missing my old life, of wanting it back. I have old photos with many times the resonance my own condo had for me.

It will be nice some day to have drawers,  to have more choices of clothes,  to have a place to spread out, and maybe some day that will matter to me more than it does at the moment.  Maybe I will settle in, start to clutter my space up, get used to receiving mail and packages the easy way, get into old and some new routines with friends, swing a golf club and a tennis racquet more often, have a car again. But paradoxically, it seems such a limited way to live.  I may only have a couple of pieces of luggage right now, but I have the world. How will I ever be contented to stay put again?

All I know is I absolutely believe, in the words of singer poet Josh Groban’s song “Let Me Fall,”

The one I want

The one I will become

That’s liminality. When I am done with this wandering, the person I have become will welcome me home, whenever and wherever that is.  No, that’s not quite right.  The person I become will be my home, just as the person I am now is all the home  I need.

I bought a shirt a few years back that says “Home Is Where the Anchor Drops.” It seems so apt for my life, but I realized tonight as the sun set in Bar Harbor and we headed off to disbark in Boston tomorrow, that for me, home is also where the anchor pulls up.

My cabin is usually on the lowest passenger deck near the bow, so when the windlass starts cranking several hundred meters of chain and an anchor to boot, it makes quite a racket.  Still, it is such a joyous sound.  “Oh boy,” it says in my language, “what’s next?”

For almost every passenger on board, tonight involves the melancholy of packing and saying goodbyes to people who can get surprisingly dear in a short amount of time.  It’s also been a day, I imagine, of savoring that last bit of lox or prosciutto and having that last lunch with free-flowing wine, or that last cocktail by the pool.

For me it’s different.  I basically live in a floating hotel that takes me to a wonderful new adventure every morning.  Getting off and being on land for a while seems less like home than this does now.

Ten days ago, the hall was lined with suitcases, and I enjoyed the great feeling of having the ship almost to myself for a few hours before the new guests began to arrive.  This time, my bags are out too, and the new guests will never know I was there.

What’s next is a couple of days in Boston with friends, then about two weeks in San Diego before I am back on board a different but equally wonderful ship.  No melancholy for me today. No reason for it.  Just my face to the breeze and my hair blowing back, ready for tomorrow and the next day and the next, wherever the now quiet ship slipping through the Bay of Maine is leading me.

Once again, while cruising port-intensive itineraries, I get too distracted to post anything more than a photo or a couple of lines  on Facebook.

i had a wonderful first cruise going north from the St. Lawrence River up into Newfoundland, which I have been told by residents is pronounced  Noofin Land.  I have been practicing, but it doesn’t come easily.

I got a lot of chances to practice my French, but Quebecois was a different story.  Even Nancy, my travel companion, whose French is pretty close to perfect, was perplexed from time to time.  I don’t think I made myself understood once, except maybe Bonjour and Merci.

I had my first chance to try poutine, the famous fill-me-up of Quebec.  It is soft French fries, covered with brown gravy and sprinkled with cheese curds (Nancy added peas—see photo below for the whole glorious mess).  There must have been two dozen variations on the theme (chorizo and guacamole, anyone?), but all I can say about the classic is that it tasted exactly as I thought it would, and that if I had gone to college at McGill I would have lived on it. Now, once was enough.

We had one rough day at sea, which seemed monumentally bad to many but about a 7 to me. Waves about  4-5 meters with gale force winds  in the wee hours when we all were trying to be asleep, so we didn’t really know we were actually briefly in a hurricane when the wind peaked. Unless my cabin is underwater briefly as it dives into the waves, I am not impressed.  Thank goodness for scopolamine patches, however.  Slap one on as a neck decoration and  swagger around pretending to be immune.

The fall colors were just starting when I arrived (see picture below taken about a week ago in Montreal) and haven’t totally taken over yet, but on this second cruise we are seeing a lot more. I suspect the full orchestra of colors will play between when I go home on October 14 and return to Montreal on October 30 for the last cruise in the area, repositioning on Silver Wind to Florida, along with the geese and many of the human residents of Canada. I seem always to be told the best is past, or the best is coming when it comes to fall colors, but it looks pretty wonderful to me right now. 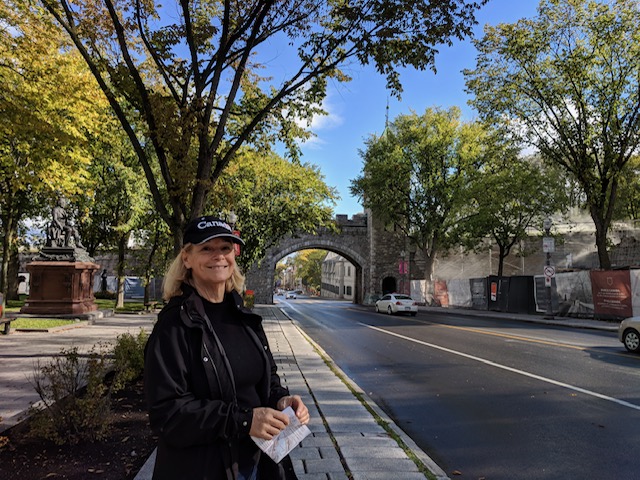 Today we are cruising very slowly in the Gulf of St. Lawrence, required by maritime law to protect endangered right whales, who can be hit by ships going full speed.  Thus a fairly short journey becomes a sea day, but it is looking like one straight out of fall clothing catalogs—sparkling sunlight,  a little fall breeze to make the cheeks rosy and the scarfs and jackets I rarely get to wear just perfect for the occasion.

All for now…peace, blessings, and a sense of wonder be with you.