People tell me they love my website, created by Gabriel Porras and Patricia Maas at Blue Jay Tech, but there’s always room for improvement!  While they’re working hard behind the scenes on the technical requirements to improve access, add information, and make the site more fun to rummage around in, I am doing some updating of the text.  For those of you who check in regularly, watch for a lot of changes over the next few weeks.  For now, I’ll point you to the first substantial change, which is my rewritten Q&As on Until Our Last Breath.  Go to the bookshelf button to locate the book,  and click Q&As once you’re there.  Or you can cut to the chase, and use this link.

Recently I was asked by Donald Harrison, editor of San Diego Jewish World, if I would like to write for the newspaper. Last week I contributed a guest column about writing Until Our Last Breath and just today my first attempt at reporting an event is in the paper. I’m looking forward to doing more of this, and I have enhanced respect for what journalists do to turn live, streaming reality into organized, polished prose. To outsiders, it may look easy, because nothing but the finished product ever sees the light of day, but as the Italians say, “Che pasticcio!” (what a mess!) exists inside my head and on my desk before it’s ready to push “send.”
Here’s an update:  I now have my own author page at San Diego Jewish World

San Diego City College has issued a very nice press release about Until Our Last Breath and the Christopher Award. It’s been amazing to me how many people–faculty, staff and students–seem to be aware I have been honored in this way, and it’s been immensely gratifying to see how happy they are for me. It’s so wonderful to have the support of so many good people. Here it is:

San Diego, CA (March 19, 2009)….San Diegans Laurel Corona and Michael Bart have won a 2009 Christopher Award for Until Our Last Breath: A Holocaust Story of Love and Partisan Resistance (St. Martin’s Press 2008).  Since 1949, the Christopher Awards have been given for books, films, and television productions that “affirm the highest values of the human spirit.”

The award honors Corona for her writing ability to “craft words and images into a clear, cohesive vision.” Bart is being honored for his years of research into his parents’ involvement with the Jewish resistance movement in Nazi-occupied Lithuania.

Corona is a professor of humanities at San Diego City College. She began her career as a published author in 1999 with a book on Kenya for Lucent Books. After writing 17 young adult titles for Lucent, she turned her attention to books for adults. Her most recent work is The Four Seasons: A Novel of Vivaldi’s Venice (Hyperion/VOICE 2008).

Corona will travel to New York to receive her 2009 Christopher medallion on April 16 as part of the Diamond Gala celebrating the sixtieth year of the awards.  One Book/One San Diego author Sonia Nazario was a recent winner for Enrique’s Journey.

Corona’s next book reading and book signing for The Four Seasons will be on Tuesday,

I recently wrote a guest column for San Diego Jewish World, about my experiences writing in partnership with Michael Bart.  Click  “Read More” for  the link to  “Award Winning Author Tells the Story Behind the Story” and you’ll find it right here.

Many thanks to Virginia Escalante for her quick response to my need to reschedule my author appearance at San Diego City College, to enable me to go to New York to receive a Christopher Award for UNTIL OUR LAST BREATH.  Thanks also to the City of San Diego Commission for Arts and Culture, One Book/One San Diego, The San Diego International Book Fair,  Jazz 88, and other sponsors for making the 2009 Spring Literary Series possible. 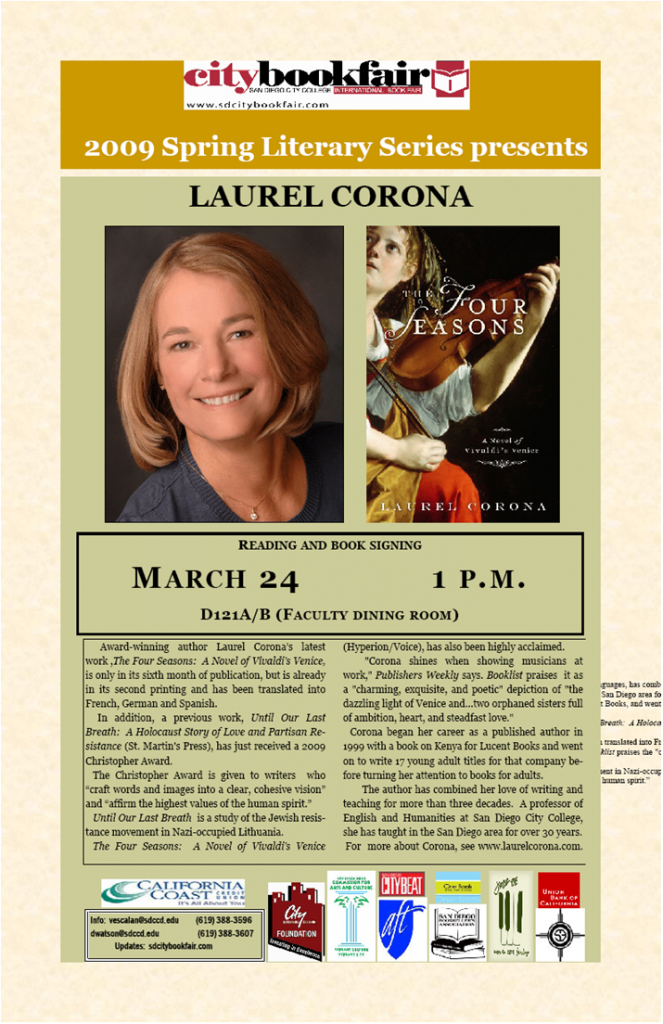 I am pleased to announce that UNTIL OUR LAST BREATH has won a 2009 Christopher Award.  These awards are given for books and productions in other media that “affirm the highest values of the human spirit.”  According to their website at www.christophers.org, these awards  “specifically honor the storytellers who, whether using fact or fiction, tell us something about the human condition,” including “ writers …who craft words and images into a clear, cohesive vision,” and  “exhibit exceptional artistic and technical proficiency.”  I am honored to have my writing recognized in this fashion and offer my congratulations to Michael Bart, also receiving this award for his research contribution to the book.  Last year’s recipients include David McCullogh (lifetime achievement); Edwige Danticat (Brother,I’m Dying); the films, Amazing Grace, Juno, and The Kite Runner; and  Ken Burns’ television series, The War.  This year marks the 60th anniversary of the establishment of these awards.
I’m looking forward to going to New York to accept this award.  A trip to New York–even a brief one–is always fun.  I’ll be meeting with my agent and catching up with a few of my author friends, and hopefully finding time for a stroll through Central Park in bloom!
About two weeks ago I went to a 95th birthday party for a dear friend’s mother. As she does every time I see her, she asked when UNTIL OUR LAST BREATH and THE FOUR SEASONS were coming out as audiobooks. Once again, I had to tell her that as of yet the audio rights had not been sold for either of them.

My friend’s mother looks fabulous. I can’t believe she is 95. But there’s no point in pretending that the passage of time is immaterial. If she is to participate in my success the way we both would like, it needs to happen soon.

Just a few days after the party, my mood brightened considerably. The Kindle 2 (Amazon’s e-reader) had just come out with an experimental read-to-me feature. I listened to a couple of pages of THE FOUR SEASONS presented by a robot voice and was, by turns, pleased with how acceptable some of it sounded and cringing at how utterly awful it was in others. The voice wasn’t an interpretation by an actor or another skilled reader, but it was saying the words on the page nonetheless.

I got in touch with my friend right away. Did she know that any book that could be downloaded to the Kindle 2 could be read aloud? Not just THE FOUR SEASONS, but pretty much any book her mother might want to read? It felt as if the heavens were opening!

But where I had pictured blue sky, the heavens that opened did so only to pour down rain. The Authors Guild (of which I am a member) launched a strong campaign objecting to what they believed was copyright infringement. I’m not a lawyer, but it seems to me the Kindle application is more like asking someone to read something to you because the print is too small and you’ve misplaced your glasses. There’s no permanent copy, and the work is not being transformed into a distinct and tangible work in another medium. It’s just an alternative way of accessing a legitimately purchased e-text without using the eyes.

My guess is that the Author’s Guild is more concerned that a read-to-me feature could be improved upon to the point where it might actually rival the experience of an audiobook. This is a legitimate concern, and I’m glad they have it. But it’s my observation that generally people don’t own the same title in more than one medium, and if this is true, people would make the choice at the outset. A vision-impaired person would buy the audiobook. Others might buy either, depending on their preference, but they’re unlikely to buy both. The author gets one sale either way. For authors whose books aren’t available as audiobooks (most aren’t), the question I have is whether they would prefer non-reading consumers not to have access to their work at all. I suspect most will realize the read-to-me feature is likely to increase their sales because people who have difficulty reading will be a new source of customers.

Just a few days ago, Amazon announced that that authors with books on Kindle would be given the opportunity to opt in or out. Sounds as if they’re listening to authors, and that’s always good. I can’t wait to say yes to the robot voice. A beautiful and beloved friend is waiting.